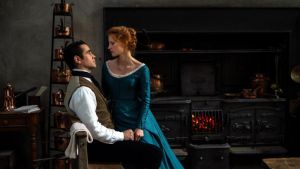 It’s impossible not to feel a little disappointed watching Liv Ullman’s translation of August Strindberg’s most-performed play. But why? The setting – Fermanagh in 1890 – could not be bettered, as it has landed the production at Castle Coole, an impeccable neo-classical building, that lends an aura of airlessness and artefact to a work that finds these same flaws in the social order.

More impressively, the precise geography allows Morton and Farrell to split their vowels into a wonderfully distinct and expressive northwestern dialect. Both actors acquit themselves well.

A furious Farrell – a valet on the make at the Big House – could not be further from the jaded, crumpled variant last seen in the tragic finale of True Detective.

Chastain is as brittle and fragile a Miss Julie as ever there was. Her dark eye circles on near translucent skin convey a damaged flightiness and breakability before she utters a single plummy vowel.

Yes, indeed, this poor cratur could surely be talked into just about anything, including her heavily-signposted fate.

Ullman mines her fellow Swede’s play for maximum cruelty. But there is, alas, no trace of the humanity that defined her earlier films, Private Confessions and Faithless, much less any warmth.

Despite the triumvirate of terrific turns, Ullman’s slavishly orthodox re-working of Strindberg-brand naturalism never allows for a real sense of character, only dramatic mechanisms and performance.

Mikhail Krichman, the brilliant Russian cinematographer who shoots Andrey Zvyagintsev’s films, creates impressive compositions in frequently enclosed spaces. But even he can’t quite convince us that we’re watching a movie and not a filmed play. TARA BRADY