Miley Cyrus: I was sacked from Hotel Transylvania for penis cake photos 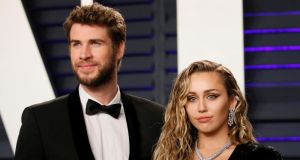 Miley Cyrus has taken to Twitter to claim that she lost her role in Hotel Transylvania, a children’s animation, because photos appeared online of her posing with a penis-shaped cake.

Tweeting in a thread addressing her recent divorce from actor Liam Hemsworth, the former Disney star said she was “kicked off hotel Transylvania for buying Liam a penis cake for his birthday and licking it.”

I got kicked off hotel Transylvania for buying Liam a penis cake for his birthday and licking it.

A source from Sony has apparently confirmed the story to the Hollywood Reporter, saying executives were worried about Cyrus moving away from the wholesome image she presented on long-running show Hannah Montana and other family friendly films.

Cyrus, 26, announced earlier this month that she was separating from Hemsworth, her co-star in the 2010 film The Last Song. Last week she released her latest single, Slide Away.

Hotel Transylvania has gone on to be a lucrative family-film franchise for Sony, earning over €1 billion at the global box office over the course of three films. A fourth Hotel Transylvania film is due for release in 2021.

TV Guide: 24 of the best TV shows to watch this week
Real news has value SUBSCRIBE