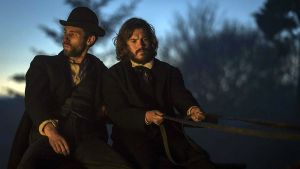 We don’t get that many westerns these days, but those that squeeze through tend to manoeuvre between two camps: the elegiac and the revisionist. It seems as if the form can only be approached (or mourned) at a respectful distance.

Distance is certainly an issue with Ivan Kavanagh’s impressive drama. The Irish film-maker shot his tale of the California Trail in suitable bits of Connemara. There is, however, little sense that he’s trying to reshape the genre or arrange another memorial. Impressively filthy, studded with convincing violence, the picture is very much in an established sub-genre. Like Shane or The Man Who Shot Liberty Valance, this is a “man’s gotta do” movie.

Emile Hirsch plays Patrick, an Irish carpenter, employed as an undertaker, who, in the mid-19th century, has settled down in a mid-western town on the route to California. John Cusack plays Dutch Albert, the sinister hoodlum with plans to turn a God-fearing locale – a little too God-fearing at first – into a den of lubricious iniquity. We suspect that, sooner or later, Patrick will take up a gun and set about restoring order.

Domestic viewers may strain a few jaw muscles in gritting teeth to Hirsch’s awful Irish accent, but, if they can get past that, they will enjoy a convincingly played quarrel between fear and responsibility. Deborah Francois is equally strong as his French wife. Pick of the performances is, however, a gloomy Cusack – the rain apparently rusting his innards – as a poisonous bandit capitalist of the old school. Never Grow Old is not in love with its surroundings. As we begin the town is flattened by the moralistic ravings of the local preacher, but the film understands that prim moral order is preferable to violent plutocracy. Draw you own messages about the current condition of the United States.

A fascinating director who has clawed out fine films such as The Fading Light and The Canal on small budgets, Kavanagh finds grimly beautiful tableaux throughout. The camera rarely hurries as it passes towards doors that open on to inevitable catastrophe. Connemara deserves an Oscar for its performance as the mid-West. What more could you ask?