Michael Collins review: nowhere near as historically inaccurate as we once supposed

Twenty years on, Neil Jordan’s drama looks like a clear attempt to sweeten history with the palatable goo of modern mythology 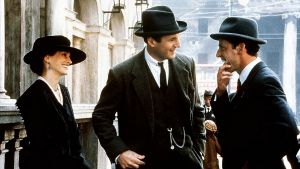 Nothing better communicates the strange hysteria that, 20 years ago, gathered around the release of Michael Collins than the behaviour of the censor (as he was then still known).

A 15 cert was originally awarded, but this was lowered to PG because of the film’s historical significance. Before its release, Neil Jordan’s picture already occupied an officially sanctified status that no mortal entertainment could hope to attain. The film smashed all domestic records and generated a thousand conversations about “historical accuracy”.

Looked at in cooler 21st-century air, Michael Collins, released this week in a new print, comes across as a lavishly appointed Event Picture that just about survives its inevitable compromises. Jordan occasionally apes the structure and style of The Godfather - cutting between a killing and the preparation for a wedding - but the most unavoidable predecessor is Lawrence of Arabia.

One senses an effort to sweeten history with the palatable goo of modern mythology. Like TE Lawrence, Collins invented a new kind of conflict - this man’s terrorism; another man’s guerrilla warfare - that (if the film is to be credited) stripped something from his soul. Unlike Lawrence, Collins never seemed in danger of going off his rocker.

Despite being a blasted northerner, Liam Neeson was perfect casting for the bluff, charismatic warrior who could, in conversation, win over the most committed antagonists. Hiring Alan Rickman, Hollywood’s favourite English villain, to play Éamon de Valera was considerably more mischievous.

Jordan could hardly have better telegraphed the film’s attitude to Dev if he had employed Lee Van Cleef. Event Movies need bad guys and De Valera’s is this Event Movie’s Child Catcher.

But the film’s biggest problem was its lack of focus. It covers only a brief period, but that period takes in enough history to fuel a brace of lengthy television series. The opening at the GPO is superbly staged, but diminishing returns set in as we race through the War of Independence and the Civil War towards an inevitable meeting at Béal na Bláth. (At 133 minutes, Michael Collins is shorter than you might remember.)

Jordan pulled together some towering collaborators. Chris Menges’s cinematography revels in the sombre autumn shades that shroud this country all year round. Elliot Goldenthal’s score surges like a Celtic Mahler.

It is, however, hard to escape the awareness that this was never natural territory for Jordan. Far from a conventional Hollywood yarn-spinner, he is at his best when adrift in the dreamy underworld. Michael Collins was, for good or ill, his compromised, awkward Gift to the Nation.

Released just a year later, The Butcher Boy is his finest work and is a contender for the greatest Irish film yet made. The censor offered no relief from the 15 cert on that occasion.