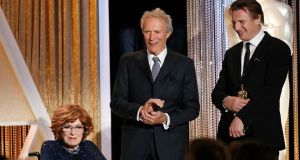 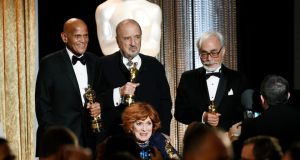 The 94-year-old, who is a prolific artist in the industry and who has deeply influenced it, appeared on stage to accept her first Oscar from the Academy of Motion Picture Arts and Sciences.

Ms O’Hara, who still boasts her famous flaming red hair, received a standing ovation after actors Clint Eastwood and Liam Neeson presented her with the award.

She sang the final words of the Irish ballad Danny Boy and thanked three men who helped make her career: actors Charles Laughton, John Wayne and director John Ford, with whom she made the classic 1952 film “The Quiet Man” opposite Wayne.

The Academy’s Governors Awards gala has become the kick-off to the film awards season, bringing some of the most powerful people in Hollywood under the same roof, gathering stars from a dozen films with potential to win Oscars in February.

Octogenarian actor and singer Harry Belafonte, accepting a human rights award, asked fellow artists and the entertainment industry to use their powerful platform to show the better side of humanity.

“To be rewarded by my peers for my work, human rights, civil rights, peace, let me put it this way: It powerfully mutes the enemy’s thunder,” said Mr Belafonte.

Mr Belafonte was perhaps best known as a calypso singer, but as an actor he starred in ground-breaking films like “Carmen Jones” and pushed to make films movies from the black perspective.

He also worked alongside Martin Luther King Jr in the civil rights movement, fought against AIDS in Africa, volunteered as a United Nations goodwill ambassador for decades and now works on gang violence in American cities.

Mr Miyazaki was heralded by American director John Lasseter for making 11 feature films, like “My Neighbor Totoro,” and drawing the storyboards for every single one.

Mr Miyazaki told the audience he felt lucky “because I have been able to participate in the last era where we make films with paper, pencil and film”.

Mr Carriere has 139 writing credits to his name, including those for “Cyrano de Bergerac” and “The Discreet Charm of the Bourgeoisie.” He thanked directors with whom he has worked, including the late Luis Bunuel and Louis Malle.

“In a way, they are all here tonight,” said Mr Carriere.