Luis and the Aliens: Unfit for human consumption 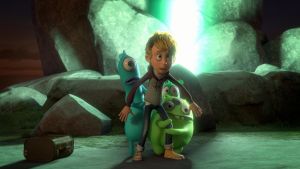 Tonally and narratively, Luis and the Aliens is a dog’s dinner

Film Title: Luis and the Aliens

Not too far into this inconceivably atrocious animation, there comes a moment when the beleaguered viewer will realise that the character who keeps saying “hey dogs” and “cray cray” to his parents is a parody of a wannabe American teen.

That’s rich coming from a film that trades entirely on fake Americana. Watch as the yellow school buses ferry Converse-wearing teens past Amish barns towards Walnut High. See the well-appointed home dusted by a Mexican maid. The generic cod-Midwestern backgrounds of this German-Luxembourg-Danish feature are matched by generic character design.

We say “character”. That’s a bit of a stretch. Luis, the motherless 12-year-old boy at the centre of this misshapen family picture, lives in a rundown house with a crackpot ufologist father. A neglected kid who has to make his own birthday cake, lest said anniversary pass without any celebration, Luis does all the household chores by day while dad sleeps, having spent night after night gazing through his telescope in search of extraterrestrial life.

Unsurprisingly, the boy has become a cause of concern for his headmaster, who calls in the terrifying Ms Diekendaker (Lea Thompson) from child services. Just as authorities are about to intervene, Luis befriends three flubbery aliens who have come to Earth in search of a massage mat they saw on a shopping channel. One of the aliens is voiced by Will Forte, the most famous person in the film.

The unlikely quartet all soon find themselves in the snooty neighbours’ house. And then the cub reporter girl Luis likes at school starts following them. And then high jinks – notably abduction, breaking and entering, sexual advances on the help – ensue. Tonally and narratively, Luis and the Aliens is a dog’s dinner. Luis’s dad is not merely absent or preoccupied, he’s genuinely, heartbreakingly awful toward his son. A scarier alien that pops up towards the end might well floor Ripley.

The dialogue is unspeakable. Or it should be. Try: “You need to focus on your gluttony: it’s your greatest flaw.” Almost 30 years ago, Christoph and Wolfgang Lauenstein won an Oscar for their animated short film Balance. This is a long way down from that accolade.

Clear off back to outer space.

Can a work of fiction about the Holocaust be inaccurate?
7

John Hume restored to his rightful place in Irish history
9

John Hume: the politician who made peace possible
10