Lilting review: Its warmth of spirit goes a long way 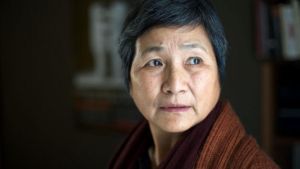 Is it cheap to suggest that the folk behind this polite drama have their eyes on both the gay pound and the grey pound? Perhaps. But it’s too late to turn back now.

So well-meaning you feel it should be supported by a flag day, Lilting begins with June (Cheng Pei-pei), a Chinese lady confined to an old person’s home in London, carrying on a conversation with her adult son Kai (Andrew Leung). She asks why she has been sent to this uninviting place. She suggests that he devotes too much time to his “friend” Richard. We soon deduce that the young man is gay. It is then revealed that the conversation is imagined and that Kai has recently died in a car accident.

Later, Richard turns up in the always-welcome form of Ben Whishaw and makes attempts to smooth troubled waters. He suggests that June call round and take away any of Kai’s possessions. Aware that June, who speaks no English, is carrying on a relationship with a fellow resident (Peter Bowles of all people), Richard brings along a Chinese woman to translate their uneasy cooing.

Director Hong Khaou, born in Cambodia and now based in London, asks his audience to swallow more than a little. The notion of a couple carrying on a romance via a translator screams “narrative device” at deafening volume. June’s refusal to acknowledge her son’s gayness becomes increasingly implausible. Although born the son of a chauffeur, Bowles has been wearing cravats too long to convince as a lower-middle class rake.

For all that, it would take an utter bounder to turn Lilting from their door. All the actors engage enthusiastically with one another, and the picture has worthwhile things to say about the barriers too often erected between first-generation immigrants and their more assimilated children. Give it a free pass for its warmth of spirit.