Fine exploration of the cultural earthquakes of the decade, if slightly overlong 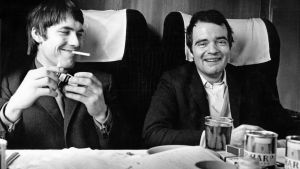 You could hardly find a better vehicle from which to explore the cultural earthquakes that hit Britain in the 1960s than the relationship between Chris Stamp and Kit Lambert.

The former, younger brother to actor Terence Stamp, was the smart, street-wise son of an East End tugboat captain. Lambert’s father, the composer Constant, was sufficiently embedded in the establishment to form the model for the melancholy Hugh Moreland in Anthony Powell’s A Dance to the Music of Time.

Depicted as neat complements in James D Cooper’s energetic, if overlong, documentary, the two first juggled ambitions to make movies. On the hunt for a band around which to structure a documentary, they encountered a rough outfit named The High Numbers and set about turning them into The Who.

There is so much here that is representative of the times. We get no sense that the gay, polylingual Lambert is engaged in any sort of class tourism. The sharp imaginative Stamp – who then looked like a lost member of The Small Faces – doesn’t come across as social climber. A decade after rationing ended, with national service abolished, younger sorts really did feel liberated to explore hitherto barred channels.

Cooper, making his directorial debut, cuts interviews together with archive footage in a zippy, noisy collage. Stamp, who died in 2012, proves a gripping raconteur. Lambert, who left us in 1981, relays the louche charisma of the doomed genius.

Unfortunately, the film does go on at least 20 minutes too long and requires the viewer to take The Who’s laughable excesses – notably the vainglorious Tommy – more seriously than they deserve. This will not be a problem for some viewers. The unconvinced will still find much to enjoy.

A Winged Victory for the Sullen: ‘There is anxiety all over the world’
10