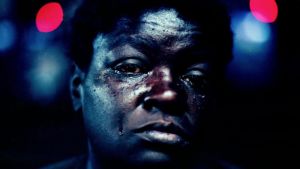 The socially disadvantaged are afforded a dignity and interest that jollies this formally challenging film along.

Khalik Allah is a fascinating latter-day Robert J Flaherty, crafting gripping ethnographic portraits and – like the Man of Aran filmmaker – occasionally blurring the border between director and subject matter.

Early in the film, Allah has a conversation with one of his homeless muses about the ethics of his practice. “It’s the best thing in my life,” his returning subject reassures him.

IWOW: I Walk on Water is very – sometimes painfully – personal for the American-Jamaican film-maker. The film is about Harlem: 125th Street and Lexington Avenue to be precise, a rough-hewn intersection that has dominated Allah’s output as a photographer and filmmaker, notably his 2015 documentary Field Niggas and 2017 book Souls Against the Concrete.
T

he official synopsis reads: “Inspired by psychedelic mushrooms, the filmmaker sees himself as a reincarnation of Jesus, with his mission of charity among Harlem’s poor.”

That doesn’t begin to cover this sprawling, trippy chronicle of a corner that remains tantalisingly beyond New York’s sweeping gentrification. Using Allah’s established technique of recording the people he asks to photograph and using the sound out-of-sync across an arresting series of tableaux, IWOW finds dual protagonists in the director himself and in Frenchie, a 60-year-old Haitian schizophrenic who lives on the streets and who, briefly, moves in with Allah.

Between musings on Sun Ra, experimental movie Space Is the Place (1974), and mushrooms, Allah receives advice on the telephone from such intriguing life-coaches as Fab 5 Freddie and assorted members of the Wu-Tang Clan. The director’s first film was Popa Wu: A 5% Story, a portrait of the Wu-Tang adviser.

Allah’s increasingly strained relationship with his filmmaker girlfriend Camila makes for a star-crossed romantic subplot. This affecting turbulence pulls the viewer in but remains a secondary love interest. It’s the images which Allah captures that linger long after this experimental film’s three-hours-plus run time.

There’s something of Pedro Costa’s fond, poetic representations of Lisbon’s poorest communities in Allah’s respectful engagement with the socially disadvantaged. They are afforded a dignity and interest that jollies this formally challenging film along.

On digital platforms from February 26th