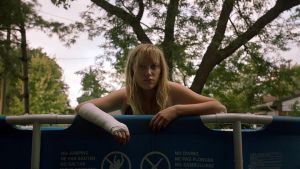 Is Detroit the new Transylvania? A year or so after Jim Jarmusch brought us Only Lovers Left Alive, David Robert Mitchell, director of The Myth of the American Sleepover, returns to that depleted city for a stunning horror that somehow manages to soak itself in the 1970s while still appearing utterly fresh. One more Motor City shocker and we have ourselves a trope.

There is something of MR James’s great ghost story Oh, Whistle, and I’ll Come to You, My Lad about It Follows. The core menace concerns a deliberately ill-defined entity – spirit, virus, metaphor – that passes from one person to the next during sexual intercourse.

Once you have been possessed (or infected) you become susceptible to the attentions of a malignity that appears as apparently ordinary human beings. As in the James story, the annihilating ghouls lumber after their victim with more grim determination than furious bloodlust.

Shooting in attractive widescreen, Mitchell exploits his paranoid conceit to its fullest extent. While the young principals go about their business, the viewer is constantly scanning the background in search of danger. Any passer-by could, seen only by the current victim, turn out to one more cell in the puzzling destructive organism.

Plenty of bad horror films have wasted potentially promising scenarios. But the fascinating texture of It Follows sets it apart from the mucky, blood-soaked pack. The excellent Maika Monroe plays Jay, a 19-year-old girl living a largely untroubled life in a suburb of Detroit. Days are spent idling with her sister Kelly (Lili Sepe) and pals Yara (Olivia Luccardi) and Paul (Keir Gilchrist).

Having seen the film open with a young woman running desperately from her suburban house and on to a puzzling death, we know some sort of menace is about the place. Sure enough, after Jay has sex with new boyfriend Hugh (Jake Weary), he explains that he has passed on the curse to her. The only way she can shake it is to sleep with somebody else. But if that person is killed, then the danger reverts back to her. Got that?

There is something of David Cronenberg’s early psycho- sexual horrors in that scenario, but Mitchell has other atmospheres in mind. We are deep in the world of John Carpenter here. Mobile phones and computers make no appearances. The kids drive big, battered cars. There is a whiff of cheesecloth about the costumes. Rich Vreeland’s score reminds us of Carpenter’s own experiments with early synthesisers.

It Follows is, nominally, set in the present, but the universe has obligingly allowed hints of the current century to be nudged into the background. Among the few exceptions is a digital reader – resembling a clam-shaped compact – upon which a character peruses Dostoevsky’s The Idiot (a novel that, significantly, has much to do with delusions).

Where the film differs from both Cronenberg and Carpenter – and acknowledges feminist advances – is in its attitude to sexuality. Despite the source of the menace, there is no suggestion that death is natural punishment for promiscuity (Carpenter) or that sexuality is in itself a disease (Cronenberg). The young people retain a degree of balance throughout.

Mitchell comes at horror from an unlikely background, and his compositions are atypical of the stalker genre: there are many long shots and leisurely editing throughout. But he proves a master of jump-shocks and creative distraction. The film works as an unexpectedly beautiful and nostalgic tribute to an era when teenage complications were no less severe, but were simply different in tone.

Coming in the wake of The Babadook and Let the Right One In (referenced in a swimming-pool sequence), this brilliantly unsettling, determinedly awkward film confirms that there is plenty of life in the high-end horror film. Essential viewing.