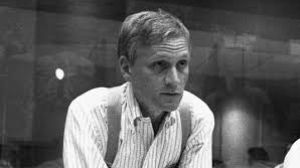 Beauty and the Beast, the much-loved 1991 Disney animation, closes with a dedication: “To our friend Howard, who gave a mermaid her voice and a beast his soul, we will be forever grateful.” Howard, a new documentary portrait of the Oscar-winning lyricist, presents Ashman as the crucial catalyst for change at the House of Mouse.

In archive audio footage, company scion Roy Disney can’t help but compare Ashman to Walt Disney. Roy wasn’t far wrong. As this engaging new documentary demonstrates, it was Ashman who saw animator Rob Minkoff’s one non-skinny sketch of Ursula the Sea Witch – inspired by John Waters muse Divine – and said “that one”. It was Ashman who fought to keep Part of Your World in The Little Mermaid when studio boss Jeffrey Katzenberg wanted to cut it. And it was Ashman who wrote the initial treatment for Aladdin, replete with a camp, ostentatious genie.

Born in Baltimore in 1950, Howard Ashman showed an aptitude for entertaining from a young age, improvising action scenes for his younger sister Sarah with toy cowboys, Indians, and nutcrackers. He graduated from college alongside his first domestic and creative partner, Stuart White, and founded the Off-Broadway WPA theatre, where he made a splash with a musical adaptation of Kurt Vonnegut’s God Bless You, Mr. Rosewater.

Ashman teamed up with his future Disney songwriting partner, Alan Menken, to adapt Roger Corman’s Little Shop of Horrors for the stage. That was a smash hit; his follow-up Smile, co-written with A Chorus Line composer Marvin Hamlisch, was not. So when Disney boss Katzenberg called, Ashman went to LA and became a key figure in Disney’s new Golden Age.

Inevitably, the film is forced to confront Ashman’s death from Aids in 1991 and the fact that he felt obliged to hide his worsening illness from his employers lest he lose his health insurance. That Hahn does this in a film that remains on good terms with Disney and suitable viewing for even the youngest Disney+ fans is impressive.