Harry Potter on screen: a magic formula for the faithful

It is the second-biggest movie franchise of all time, but the films are slaves to the text 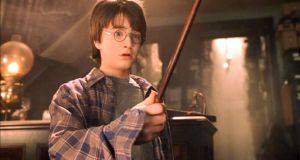 Daniel Radcliffe in ‘Harry Potter and the Philosopher’s Stone’: ushered in an era when faithfulness to the text was seen as a virtue in itself

Back in 1999, David Hayman, a young producer then working on Antonia Bird’s arthouse cannibal flick Ravenous, swallowed hard and persuaded Warner Brothers to fork out £1 million for the rights to the first four Harry Potter books. The novels were already enormously popular, but they were not quite the zeitgeist-defining phenomenon they would soon become. By the time the first film emerged in December of 2001 that process was well under way. Chris Columbus’s Harry Potter and the Philosopher’s Stone was expected to conquer worlds and generate sequels for a decade. It did.

The effect on the British film industry can scarcely be overestimated. Clocking up $8.5 billion, the nine films of “JK Rowling’s wizarding world” – that includes last year’s prequel Fantastic Beasts and Where to Find Them – counts as the second highest-grossing franchise of all time. This only tells part of the story. The average haul of $950 million per film is way ahead of any other film series in the top 10.

The Harry Potter films developed a pension plan for endless Irish and British stars. Richard Harris, Maggie Smith, Fiona Shaw, John Hurt, Brendan Gleeson: we could fill this entire article with nothing else but the names of actors who did well out of Potter. Meanwhile, younger actors such as Robert Pattinson, Domhnall Gleeson and Evanna Lynch cut new teeth on the franchise. “Harry Potter spoils you a bit. You’re working on something that everyone wants to be good. You can’t fail, really,” Lynch, who grew up in Termonfeckin, told The Irish Times recently. Potter was an industry within an industry.

The artistic value of the pictures is trickier to assess. One cannot argue with the professionalism on display. Arriving just as computer-generated effects were achieving the status of magic, the films created universes within which a whole generation would grow up. Daniel Radcliffe, Emma Watson and Rupert Grint made each of the three main characters his or her own.

These were, however, fiercely conservative films that gave directors little opportunity for individual expression. Only Alfonso Cuarón’s Harry Potter and the Prisoner of Azkaban, the third episode, revealed unmistakable fingerprints of its creator. By any objective measure it is the best of the films, but it is also the lowest-grossing (not that $797 million is chump change). Potter ushered in an era when readers of books – and comics – became increasingly convinced that faithfulness to the text was a virtue in itself.

It’s worth comparing the Potter people’s approach with those of the Bond brigade. By the time Roger Moore arrived in 1973, the 007 films bore little meaningful similarity to Ian Fleming’s novels. What few things worked on screen remained. Everything else was bunged out. Nobody seemed to mind. In sharp contrast, Potter fans expected to follow the film as, fingers pressed to the sheet music, obsessive Mozart fans used to nod along during chamber concerts. The result was films that were hugely satisfying to those already on board and a little plodding to those who’d never read a word of Rowling.

As with all contemporary problems, we must blame the bleeding internet. Once, film-makers could put distance between themselves and the fans. Now, the enthusiasts are lurking over the virtual shoulder eager to point out that Dumbledore is wearing the wrong hat.