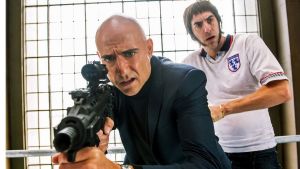 A decade ago, a middle-class, Cambridge-educated comedian structured a farce around borderline-racist Central Asian stereotypes and drew laughter from even the most resistant social-justice warriors.

Now, the same comic directs his fire towards working-class East-Midlanders. Why was it so easy to forgive Borat? Why does Grimsby seem so depressingly mean-spirited? After all, Nobby Grimsby, the anti-hero of this largely feeble spy spoof, is just as much an innocent abroad as was Borat Sagdiyev.

It’s partly to do with the fact that, in Borat, Sacha Baron Cohen allowed the journalist’s American guests to unwittingly generate most of the humour. We also were aware that – filmed partly in Romania – the film wasn’t attempting any meaningful parody of Kazakhstani mores.

Here, the comic, raised in west London, really does seem to be looking down from a great height on his Northern compatriots. More than anything else, the new film just isn’t very funny.

Raised in the town that bears his name, Nobby has spent 28 years boozing, shagging and pining for his long-lost brother Sebastian. He sticks fire-crackers up his arse. He lives for the national football side.

One unlikely day, a friend spots somebody he believes to be the grown-up Sebastian and dispatches the layabout to London. It transpires that the other brother has grown into a secret agent slick enough to be played by Mark Strong. Disgusting mayhem ensues.

There is nothing to the titular creation other than heightened variations on Northern conventions. Ask any half-witted drunk to impersonate a Grimsby man and this is what you would get. He has dozens of children, each of whom is allowed to watch violent TV and consume any passing carcinogen.

“I thought I told you to give up smoking,” he asks one wheezing child. “I thought you just meant crack,” he replies. That’s not even a joke. It’s just formalised rudeness to national neighbours.

The few laughs the film does generate come during the most conspicuously revolting scenes. The bit with the shagging elephant stands out. The jokes about Aids are, however, best forgotten.

Anybody else remember the woeful Ali G film? We have gone through a complete circle.

‘North Dakota, nul points’: Why the American Song Contest can never be as bizarre as Eurovision
7