Game of Thrones: ‘Ramsay is so extreme. What can you make him do next?’

Some fans say last night’s Game of Thrones was the best ever. Iwan Rheon discusses 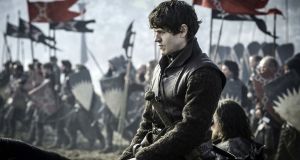 In the end Ramsay Bolton got what he deserved. Well that may be overstating things: it’s hard to imagine a demise dire enough to adequately punish the scourge of the North, whose atrocities over nearly four seasons on Game of Thrones included rape, patricide, infanticide, Fat Walda-cide and castration.

But his long-awaited extermination, which began with a fevered bludgeoning by Jon Snow and ended with his hungry hounds making a meal of him, “was a really justified way for him to die”, says Iwan Rheon, the man who played Ramsay. “He’s been talking about those hounds for long enough, and he’s been torturing and killing people with them for long enough.”

Craving and predicting the manner of Ramsay’s end had become an online parlour game in recent weeks, a testament to the sublime loathsomeness Rheon cultivated in Ramsay. Not only did he do terrible things, he did them with relish: the Welsh actor has described his portrayal as a mashup of Heath Ledger’s Joker, Liam Gallagher and Dennis the Menace.

True to form, Ramsay remained wry and arrogant up until the moment one of his “loyal beasts” tore into his face. “He got a just end, didn’t he?” says Rheon. “I wanted dragons but you can’t have everything in this life, can you?”

It seemed Bolton had reached a point of no return. Did he know going into this season that this would be it for the character? “I had a feeling. I sort of thought last year I’d go, actually. A character like Ramsay is so extreme and he’s done such extreme things. What can you make him do next? He’d reached his natural conclusion. And also in terms of the story line, it’s so important that the Starks get Winterfell back. That good kind of comes back into the world a little bit, before it all kicks off in the end.”

People don’t always stay dead on the show. “I made a bit of a joke to David [Benioff, one of the creators] about how he could be a White Walker now that he’s been eaten by dogs. And David went, ‘No!’ So yeah, not to give away any spoilers, but Ramsay’s done. And good riddance, I’m sure everyone would agree.”

Ramsay’s death was Rheon’s last day on set. “That was the last thing we shot. So it was kind of fitting, really. And to be honest at the end of that day all I really wanted to do was go and get all the [grime] washed off me. I was covered in all manner of it and it was quite uncomfortable. So that was my priority, as opposed to having a big round of applause and being sentimental.”

That final, extraordinary battle scene meant being covered head to toe in muck “all day. Eating was a challenge.” The brutal final scene with the dogs was “all CGI. There’s very little contact with the dogs. They’re trained to be brutal guard dogs. They’re not pets. You’re not allowed to make eye contact with them because they might think you’re threatening them. It’s just not safe to be anywhere near them.

“We did one shot where there was a real dog behind me in a cage. But the rest of them were digitally put there. It also adds extra pressure to shooting when you throw in a few dogs. You can’t really ask them to be quiet.”

This was Bolton’s biggest series and it was packed with highlights for Rheon. “Every season there seems to be one scene that stands out for an actor. This season it was great to do that big parley scene on the horses, finally getting to meet Jon Snow. Also the dinner table scene with everyone was really cool. And the shaving scene in Season 4. That was probably one of the best scenes I’ve ever got to be a part of.”

As to Ramsay’s most despicable act? “So, so many. I think [castrating] Theon was pretty bad. But then, so is raping Sansa Stark. Killing his own brother and stepmother ? That was probably not the nicest way to do that.”

Far from being happy to leave Ramsay behind him, Rheon says he will miss the show. “It’s wonderful to be in something that you know is good. Everyone’s really proud of the work and it raises the level, I think. That time of the year when we get the scripts and it’s time to start again, when July comes. I’ll be very sad.”