“Some day a real rain will come and wash all this scum off the streets,” seethes Robert De Niro, with what could be an election-winning slogan 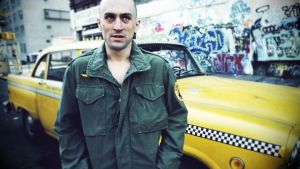 Martin Scorsese has talked a lot – no better man – about how Rainer Werner Fassbinder’s The Merchant of Four Seasons influenced the discombobulating colour scheme, and how Robert Bresson’s Pickpocket impacted on Travis’ amoral confessional. There are further visual allusions to Luc Godard’s Two or Three Things I Know About Her (1967), Irving Lerner’s Murder by Contract (1958), and Francesco Rosi’s Salvatore Giuliano (1962).

More than this, the director and Paul Schrader, Taxi Driver’s Calvinist-raised screenwriter, have owned that this hallucinogenic 1976 psychodrama – now 40 years old – is a trippy remake of John Ford’s The Searchers.

Both films feature self-appointed avengers, former military men, seeking to rescue young girls who may not wish to be rescued, and both are underscored by genocidal rage. “Some day a real rain will come and wash all this scum off the streets,” seethes Travis Bickle (Robert De Niro), with what could be an election-winning slogan.

Travis carps endlessly on the diseased psycho-geography of the city where he never sleeps. But even emerging against the shady moral post-Vietnam, post-Watergate hinterland, he’s a contradiction beyond what Dostoevsky might have imagined. (Tellingly, Schrader consulted that author’s Notes from Underground during the writing).

A socially challenged hypocrite who takes Betsy (Cybil Shepherd), the object of his affections, to a Swedish sex film, only to turn against all things sleazy when his mortifying ploy fails to win over the girl, Travis’ motivations against Senator Palantine and Harvey Keitel’s pimp are entirely rooted in sexual frustration: an outsider teen who fails to ‘get some’ amplified by Bernard Herrmann’s lascivious score, a status that may well account for the film’s enduring popularity among adolescents.

As with John Wayne’s Ethan Edwards (Travis’s spiritual forefather), his thwarted patriarchal possessiveness is not tempered by anything like genuine concern, yet it is enough – assuming those newspaper clipping are genuine – to make him a peculiarly American folk hero.

Is Betsy really in the car during that final sequence? That last paranoid glance back in the rear-view mirror suggests that Travis’ diseased psyche has not been healed, that his killing spree has not been cathartic, and that he’s still out there, stalking and biding his time.

Sufjan Stevens: ‘We didn’t just wake up with a celebrity president. It was cultivated’
10