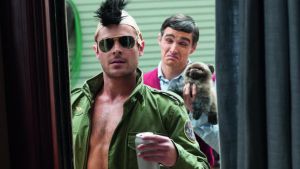 The success rate on the post-Apatow school of improv-heavy comedy is now so low that any even vaguely clever entry to the genre is worthy of celebration. This might explain the noisy rejoicing over Bad Neighbours (retitled here from Neighbours to avoid confusion with a certain Australian soap) in the US following its screening at South by Southwest. It’s not great, but it’s not terrible. That will do well enough.

A swathe of the US comedy aristocracy has come up with a cunning ploy here. Bad Neighbours is, essentially, a beery frat-house comedy but, by having us identify with the unfortunate next-door neighbours, the film-makers allow us to skirt above the debauchery. We are not laughing with the louts, we are laughing at them. If you say so.

One can’t fault the casting. Dave Franco and Zac Efron flex their muscles as two hilariously beautiful students. Seth Rogen and Rose Byrne are nicely complemented as the middle-class neighbours. Though Byrne is cast as a stay-at-
home mom, it is nice that she is allowed to remain Australian (has this happened since Grease?) and be every bit as funny as the male lead. Indeed, the film even makes a meta-reference – via a dig at Kevin James – to cinema’s habit of making women sensible but dull in such broad comedies.

That’s one of the cleverer bits. There is amusing dumb stuff as well. A running gag involving the planting of vehicular airbags about Rogen’s home and office almost justifies the admission fee on its own. Who wouldn’t pay to see the big man propelled repeatedly into an unwelcoming ceiling?

Much of the rest is indulgent, over-extended and ramshackle. The ending, in particular, could hardly be lazier if they had simply allowed the camera to roll while the grips packed away the scenery and curled up the cables. We don’t ask for Neil Simon, but something that resembled a completed script would be nice.