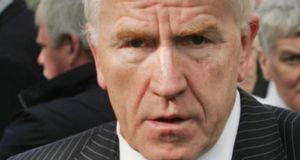 €4.5 million project , provisionally entitled The Rising about the events of 1916. The focus will be very much on Leitrim man Seán Mac Diarmada, who he sees as the mastermind of the event.

McCann admits he too “pontificated around dinner tables” about the rights and wrongs of this most dramatic period in Irish history but with the centenary hurtling towards us, he says it’s time to stop averting our eyes.

“The Irish people must stop looking at each other out of the corner of our eyes whenever 1916 is raised,” said the Cavan man.

Six months in the US
The producer and writer who has spent six months in the US garnering support for the film, believes that while Pearse and Connolly took centre stage, there would have been no Easter Rising without Mac Diarmada who he says spent years planning an insurrection.

Only 33 when he was executed alongside James Connolly, Mac Diarmada was born on a small farm near Kiltyclogher, Co Leitrim, the eighth of 10 children.

“He was the only full time revolutionary,” said McCann. “Most of the others were important cultural figures – poets, teachers, barristers. But Tom Clarke who had a tobacconist in Parnell Street, had been in prison for 16 years and Mac Diarmada and Clarke were thick as thieves. From the early 1900s Mac Diarmada was spreading the gospel that a revolutionary movement was needed in Ireland.”

McCann has raised over €100,000 to develop the film which is already attracting a lot of interest. He has discussed the project with Minister for Arts Jimmy Deenihan while US lobbyist Tom O’Neill son of legendary Irish American politician Tip, has , he says, been very supportive. Hollywood actor Josh Brolin (No Country for Old Men and Milk) has been sent the screenplay which McCann co-wrote with New York-based writer Colin Broderick. McCann says the star is interested in the project but at 48 is possibly too old to play the central role.

He does have someone in mind for the Mac Diarmada part, but he is staying mum for the moment.