Everest: up where the air is clear – and deadly

‘Everest’, a $65m epic about the 1996 disaster on the world’s highest mountain, brings back memories for two Irish climbers

Lorna Siggins gets the views of Irish Everest summiteers Ian Taylor and Hannah Shields on the new movie ‘Everest’, the true story of an attempt on the summit of Mount Everest in 1996, directed by Baltasar Kormákur. 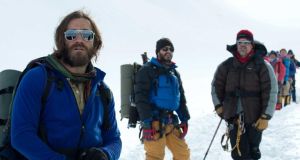 Lipstick, a loo roll, Paloma Picasso perfume, a naggin of Bushmills and some Tayto cheese-and-onion crisps. These five items are an indispensable part of the kit that Hannah Shields carries when she sets out for high altitudes.

Yet when the Derry dentist had her sights set on Everest, in 2003, she’d have gladly jettisoned them all, and surrendered her toes and fingers to frostbite as well, to reach the 8,848m plateau. “I thought that I could always retrain as a pharmacist if I could no longer use my hands,” Shields says.

She was saved by a “moment of clarity” – she remembered that if she got into trouble in high winds and freezing temperatures she could be risking the lives of three colleagues close by.

That’s why Shields, who returned in 2007 to become the first Northern Irish woman to climb Everest, fully understands the affliction that is synonymous with the world’s highest peak. “Summit fever” is the theme of Everest, a new film about the May 1996 season, when 12 people died, most of them over one 24-hour period on the south side of the mountain.

Krakauer’s book was partly driven by his determination to correct some inaccuracies in his initial report for Outside magazine. It was lauded as a masterly account of how, in the words of the mountaineering writer Jim Perrin, a “deadly conjunction of commerce, ego and competition” had “dissipated the mortality of an activity where selflessness and responsibility were once commonplace”.

Into Thin Air exposed the pressures associated with commercial expeditions, allowing “clients” with limited experience to buy high-altitude escort by guides and Sherpas.

Led by the seasoned New Zealand climber Rob Hall, of Adventure Consultants, the expedition Krakauer joined appeared to be in “superb physical shape”, the journalist wrote. But he noted that they had done much of their training on StairMasters and treadmills rather than real peaks.

Similarly fit and driven, but lacking the sort of mountaincraft that comes only with experience, were some of the clients of Mountain Madness, a commercial company led by Scott Fisher, a North American climber.

Among them was a socialite and former fashion editor named Sandy Hill Pittman – an “indefatigable seeker of public attention”, according to Krakauer – who hoped to become the first North American woman to climb the world’s seven summits. One of Pittman’s web postings for NBC described how she had packed her espresso maker.

Fischer’s guides included Anatoli Boukreev, one of the world’s toughest climbers, who eschewed oxygen, believing people who needed it at high altitude shouldn’t be there. The Russian-Kazakh was criticised afterwards for abandoning clients and colleagues, four of whom died above the South Col, but it transpired that Boukreev had repeatedly left the safety of his tent in blizzards to rescue another group of climbers stranded a few hundred metres away, and had also ascended to try to help his leader.

Boukreev would contest Krakauer’s account in his own book, The Climb, written with G Weston deWalt. Hill Pittman noted in an interview that “what was reported in 1996 was prejudiced, sensationalist and overblown – thrilling fiction at best, but not journalism”.

Ireland’s youngest Everest summiteer, Ian Taylor, who was 29 when he reached the peak in 2008, was invited, with Hannah Shields, to a recent preview of the new film in Dublin. Taylor was immediately impressed with the re-creation of the atmosphere at base camp, and of the bustle and hum of Kathmandu.

From early on it is clear that much of the narrative is sympathetic to Hall. To play him, Jason Clarke trained on Ben Nevis, in Scotland, and on the Tasman Glacier, in New Zealand, and even quit coffee because the 1996 climbers preferred tea. Significantly, a key adviser on the film is Guy Cotter, who succeeded Hall as head of Adventure Consultants after his boss’s death.

The quick shift from the party atmosphere at base camp to the perils of crossing the Khumbu icefall, and the depictions of snow blindness, fits of coughing and early signs of pulmonary oedema farther up the mountain, are all familiar to Taylor and Shields.

“On my way up with Graham Kinch in 2008,” Taylor says, “I was standing five feet away from Rob Hall’s body. I remember my whole left calf and lower back were really sore, and I could hardly breathe. This Scottish guy was 20 feet head of me, and he almost pulled us off the mountain.

“I recall two occasions when I couldn’t focus, continuing on only after my Sherpa tapped me on the shoulder,” he says. Taylor, who broke down twice, remembers being terrified.

Shields, who saved a snowblind Sherpa’s life after her decision to turn around in 2003, knows how dependent even the most experienced climbers are on their Nepalese guides and route setters. The work of the “icefall doctors” in the Khumbu, and the intense preparation and load-carrying farther up the mountain, are given little credit in the film, although 11 working Sherpas are among the cast.

Shields is sympathetic to Boukreev’s account of what happened in 1996, having heard the Russian perspective from her team leader, Alex Abramov, during her summit in 2007. She believes the film-makers tried to strike a balance between the conflicting accounts.

Perhaps for logistical reasons, Everest doesn’t focus on other fatalities on the same day, when a Japanese climbing team on the north side was wrongly accused of ignoring participants in an Indo-Tibetan Border Police expedition on the North Col.

The film was almost complete in the spring of 2014, when 16 Sherpas were killed in an avalanche and the mountain was closed for climbing; a second-unit crew with the film, which had been acclimatising at base camp on the south side to shoot more footage, escaped injury. This year at least 22 people, more than half of them Sherpas, were killed on the mountain when the 7.8-magnitude earthquake hit Nepal in April.