Eva Green: ‘It’s great to go bonkers. You are not able to do that in real life’ 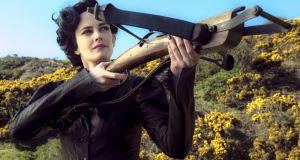 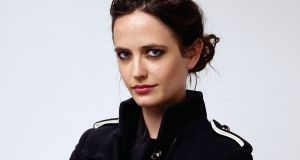 Eva Green: ‘I am so sick of this femme fatale thing. So maybe I should dye my hair blonde and do an American comedy.’ Photograph: Matt Carr

“It’s so great to hear the accent,” Eva Green says to me. “Where in Ireland are you from?”

Green has that sort of presence. Over the last decade or so, after debuting in Bernardo Bertolucci’s The Dreamers, the French actor has become our era’s most potent purveyor of gothic glamour. Nobody else does what she does. Nobody else can lower her brow and stare as if focussing the wrath of a thousand unsettled souls (or something). You get quite a bit of that in her performance as the title character in Tim Burton’s imminent Miss Peregrine’s Home for Peculiar Children.

“I am so sick of this femme fatale thing,” she says in a perky voice. “I don’t know what it means. I suppose I played one in Sin City - 100 percent evil. I see that. But Penny Dreadful is dark and tormented. That’s different. There are many layers to that. I find that very meaty. So maybe I should dye my hair blonde and do an American comedy.”

I had read that she was actually a natural blonde.

“Yes! That’s right. I am a dark blonde. I think I need to be careful. I don’t want to be seen as being too sophisticated.”

I must apologise. You probably didn’t want to read that Eva Green - recently so distraught and demented on the TV series Penny Dreadful - turns out to be in no way intimidating. This is, however, very much the case. She looks magnificent. Wearing something black and diaphanous, the trademark eye make-up shockingly in place, she is unlikely to be ignored in a crowd. But she is still very much up for a nice chat.

“Ireland is so real and funny,” she almost gushes. “I shot the movie Cracks there. I always had a happy time. Then three years of Penny Dreadful. And Camelot. I feel like I have something Irish thing going on within me.”

Clipped precision
I imagine she feels there are a few nations warring for attention within her psyche. Eva Green, now 36, is the daughter of Marlène Jobert, a well-known French actress, and Walter Green, a dentist of Swedish descent. She lives in London. Her accent is notable for its clipped precision. One is reminded a little of Charlotte Gainsbourg’s voice, but there are fewer Gallic flavours to Green’s delivery.

“My name is misleading as well,” she says. “It means ‘branch’ in Swedish. English is still not my mother tongue. I had to learn the language. I don’t know where I belong. Everywhere, maybe.”

Eva attended the American University of Paris and was an exchange student in (of all places) Ramsgate for a spell. So we shouldn’t be surprised she speaks English so well. Her breakthrough came in 2002 when Bertolucci cast her in the sexually explicit student drama The Dreamers. Remembering the toll the director’s Last Tango in Paris had taken on Maria Schneider, her advisors were uneasy about the project.

“My mother was not happy,” she remembers. “They said: ‘Don’t do it’. They called friends and asked them to tell me not to do it. They were worried because of Last Tango and Maria Schneider. On that one, I am glad I didn’t listen to them. Bertolucci was a gentleman and I was glad to do it. But she a mother and it’s right that she worries.”

Following that debut, Green has rarely found herself short of prominent roles. She was splendid as Sibylla, Queen of Jerusalem in Ridley Scott’s Kingdom of Heaven. She was one of the best things in the Bond revamp Casino Royale. On TV, she was a regular in both Camelot and Penny Dreadful.

“I was lucky,” she says. “I came out of drama school and went straight to the theatre. As an actor you do struggle every day. You depend on other people’s desires. After each movie you think: nobody will want me anymore. That is difficult.”

Witchy presence
There are worse things than “being seen as too sophisticated”. Green has found herself cast as a witchy presence - literally as a witch in The Golden Compass - more than she might like, but it can pay to have a USP. That persona certainly fitted neatly into the Tim Burton aesthetic. Four years ago she was the best thing in the director’s odd Dark Shadows. She is similarly dominant as Miss Peregine.

“He’s very normal,” she says of Burton. “People think he is strange because he makes unusual things. I find him so normal and humble and accessible. He’s funny. There is none of this [adopts Vincent Price voice] ‘Woo, welcome to my world’ about him. His work is sensitive and he is sensitive too.”

Miss Peregrine, keeper of a hostel for magically gifted children, proves to be a fairly even-tempered character by Green’s standards. We do love to see her unleash the inner whirlwind. Her psychic meltdowns were the main reason to watch Penny Dreadful.

“I find that very liberating,” she says “It’s great to go bonkers. You are not able to do that in real life. It’s like being a little girl again. I love changing my voice. This is such a strange job. I love going through that voice range. I like using the voice like it’s an instrument. I love extreme stuff.”

She stops to make a faux-prim gesture.

The enthusiasm for meat noted, she explains that we will next see her opposite Alicia Vikander in Lisa Langeth’s low-key road movie Euphoria. “It’s not a very sexy character,” she shrugs.

Meanwhile, Eva maintains an impressively quiet life in London. She is rarely snapped when buying milk in her pyjamas. No romantic encounters have made it to the front of the tabloids. I wonder how she manages it.

“I can make myself invisible,” she says mysteriously. “I don’t dress up either.”

Interestingly, Green reckons that it’s easier to live the life she lives in London. We have been told again and again that the UK’s tabloids are among the world’s most rapacious. But Eva seems to have found a degree is peace in the city.

“I feel like an adult here,” she says. “Well my mother was very famous in France. So I am separated from that. I love walking through the parks. People judge you a bit less in London. In Paris they are really like…”

I wish I could accurately convey the look of withering, snobbish disgust she then adopts. Mind you, if that expression could be put into words, there would be less reason for Eva Green to exist.

Of course, we can’t say such things about the Parisians.

What’s the French for ‘good sport’?