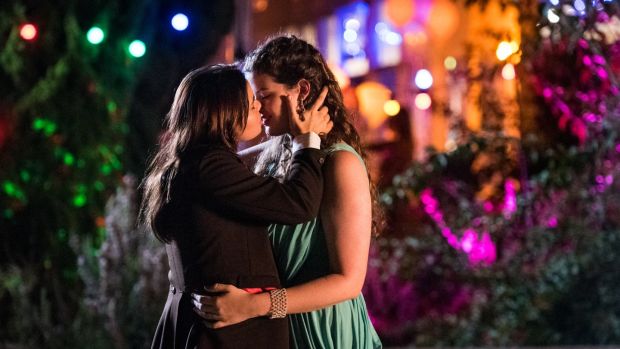 As cinemas grind back into action, decent streaming options continue to land in the usual places. Homebodies could do worse than cuddle up with this charming (no review will avoid that word) lesbian rom-com set in and around a sunny Sydney high school. The film is, perhaps, a little too well-meaning for its own good, but it would require a heart of anthracite not to wish its protagonist well.

We begin with both a tribute and a rebuke to the American teen comedy from which all such projects trace their lineage. A teacher makes fun of one student’s extravagant attempt to invite another young person to the “prom”. He good-naturedly crosses out the Americanism and writes in the word “formal” (“debs” here, of course) before scribbling a few other grammatical corrections.

Ellie (Sophie Hawkshaw), a bookish, earnest type, is also fretting about who to take to the end-of-year dance. She has her eye on the less inhibited, more raucous Abbie (nonbinary actor Zoe Terakes), but isn’t entirely sure her schoolmate is into girls. Someone suggests that she ask Abbie to name her favourite Australian Rules footballer. If she has an answer then she is a lesbian. If we were in any doubt that this is merely a gag, Ellie herself stumbles when asked the same question. “Um, Roger Federer?”

By this stage, the protagonist is also dealing with visitations from her dead aunt Tara (Julia Billington). The fairy god-lesbian allows the script to playfully tease out differences between life in the LGBTQ community now and a few decades ago. Tara is baffled at how little fuss gathers around her niece’s sexuality. “It’s not really that big a deal,” Ellie says. Tara’s allusions to kd lang and Melissa Etheridge don’t exactly fall on deaf ears, but those figures are not quite the presiding figures they once were.

There is at least one achingly clunky coincidence in the film’s closing act. Sometimes the characters are a little too cute for their own good. But Ellie & Abbie (& Ellie’s Dead Aunt) – a rare film with no baddies – does a good job of exploring developments in gay culture through the dynamics of generic high-school comedy. We even get a stereotypical “race to the airport” in the last 10 minutes. It’s not an actual airport, but you surely get my meaning.

Lee Isaac Chung: ‘There are a lot of hate crimes going on right now against Asians’