‘February feels right. It’s gloomy and dark and that’s a good time to go to the cinema,’ says director 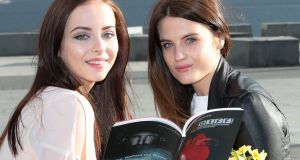 The programme for the 2016 Audi Dublin International Film Festival was launched on Thursday evening at Whelan’s on Camden Street.

Gráinne Humphreys, director of the event, discussed two significant changes from last year’s event. Audi come on board as title sponsors following a decade of support from Jameson. After moving for one year to March, the festival will return to its traditional spot in late February.

The timing could hardly be more perfect for ADIFF’s opening film: John Carney’s Sing Street. Carney’s musical, a spiritual brother to the same director’s Once, has just picked up incandescent raves at the Sundance Film Festival in Utah. Kelly Thornton, who stars as muse to rock band in 1980s Dublin, was among the talent in Whelan’s to celebrate the launch. She was joined by Nika McGuigan, star of Rebecca Daly’s Mammal, another Sundance hit playing at ADIFF.

The festival ends with the Irish premiere of Paddy Breathnach’s Viva, a drama set among drag queens in Havana, which made the last nine in the race for best foreign language picture Oscar. The film didn’t secure a nomination, but the Academy’s loss is ADIFF’s gain. The film-makers will be in the Savoy a few hours before the Oscars begin.

White Riot: When rock fought the racism of David Bowie and Eric Clapton
5 Why Can’t a Woman Be More Like a Man? by Lewis Wolpert
Real news has value SUBSCRIBE