Colin Farrell: “Lothario! There’s a nice word for a slut. Imagine what they’d say if I was a woman”

He’s older, wiser and still sober but Colin Farrell hasn’t lost any of his wicked streak – and he’s definitely in touch with his feminine side. The Saving Mr Banks star on film, family, fame and femininity 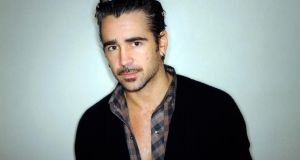 ‘I’ve been at home in Los Angeles for the past two months with nothing on but the two kids,” says Colin Farrell as he stretches into his chair. “Henry to the right of me; James to the left. It’s been brilliant, love.”

In common with many long-serving Irish film writers, I’ve lost count of my encounters with Colin Farrell. Nowadays he’s familiar. And he has always been a personable sort. It’s not necessarily good for business: precious interview minutes get eaten up when we swap family photos or get wasted on unprintable chit-chat. More time is squandered when he calls on his older sister Claudine to settle a debate.

You can ask him anything. You can talk about the time he got beaten up by Stewie Griffin on Family Guy (“It’s cool; it’s grand”). You can enquire about his misspent youth: “I had just gone off the jars when camera phones really took off. Talk about your lucky escape. Them things are a pain in the hole.”

He brims with pride discussing the youngsters, especially James, who has Angelman Syndrome and who has made remarkable progress despite a prognosis that once seemed grim. “You worry about the future,” says dad. “That’s the hard part.”

Back in days before fatherhood, I recall that meet-ups with Colin Farrell were heaps of fun even when he was, in accordance with that well-worn euphemism, tired and emotional. I remind him of one of the first interviews I did with him . . . at the tail-end of a 72-hour bender. He gave, well, interesting answers.

“I don’t remember that one,” he laughs. “When I think about it – and I can only think about it in an abstract way – I’d love to say I can remember it. But not a chance. Lucky if I need to check the details I can always go online, what? Oh man. The internet. What a thing!”

Happily, the intervening years (and many tabloid headlines) have not wearied his cheeriness nor his propensity for eyebrow-raising candour.

I’m not surprised. One of the nicest things about Colin Farrell is that he’s a woman’s man. Scratch beneath the surface of cheeky headlines about Dame Eileen Atkins (“32 years his senior!”) or ex-squeezes Britney and Angelina and you’ll find a chap who is genuinely comfortable around females and femininity.

Damn right, he says. “I LOVE women,” he shouts. “I’d be mad not to. They’re beautiful. I adore them. Truly, truly. It’s a good thing and it ain’t changing.”

Is that why his Wikipedia entry describes him as ‘Lothario Colin Farrell’?

“Lothario! There’s a nice word for a slut. Imagine what they’d say if I was a woman.”

In this spirit, he defends popular female hell-raisers and tabloid targets: take a bow, Lindsay Lohan: the Farreller is on your side.

“There’s an unbelievable hypocrisy going on here,” he says. “No matter how bad I was in years gone by, there was always someone who was prepared to cheer me on: ‘That Colin Farrell is a real lad, sure he’s hilarious’. Nobody cheers for women going a bit mad. Even if they’re doing something that 200 other people are doing in a nightclub down the road. It’s a total double standard.”

He is, nonetheless, unfortunate that his own exuberant years were played out in a very public forum. Most Irish readers may have shrugged upon reading such shocking headlines as “Colin parties all weekend!” But in Hollywood, where quinoa and HIIT protocol reigns, jaws duly dropped open.

“Yeah,” he nods. “It gets magnified and distorted when it’s happening in public. It makes it seem like a really big deal. In reality I wasn’t completely gone. I was definitely doing a bit too much of whatever. But really visibly. It’s a bit worrying when you’re watching Oliver Stone on CNN and he’s asked: ‘Who’s the craziest guy you’ve ever come across in Hollywood? Was it Charlie Sheen?’ And Oliver goes: ‘Naw. Colin Farrell was worse. He was pretty bad’.”

Wow. Coming from Oliver Stone, I’d take some perverse pleasure in that. “I know. I did. It’s sad to say that some part of me felt a hint of pride. But most of me nearly fell off the couch. I love Oliver and I watch out for him anytime he’s on the box with Bill Maher or whoever. But I never expected him to say that. Fucking hell.”

Mr Stone’s adventures with Our Colin date back to Alexander, a set that spawned plenty of wet and wild rumours of excess. Most of these epic tales – take that, Macedonian hero – featured Messrs Farrell and Kilmer.

“I had heard terrifying things about Val Kilmer,” recalls Colin. “But I loved him. He was a dream to work with. Mad as a brush. But that’s where all that creativity and brilliance comes from. Look at Val in Tombstone. Watch him in Top Secret. There isn’t anyone better.”

Alexander, as history records, should have been a high point for the actor. Instead it was one of many glitches on the CV. See also S.W.A.T. or Daredevil.

“I kind of got burned in the comic-book world with that one,” he laughs. “But sure I’m still here.”

When did he realise the flops were just that?

“It depends. Sometimes you don’t know until you see it. You get to the credits and you think: ‘Okay, there’s no possible world in which this is going to work’. And then there are films like Alexander. I didn’t know that wasn’t going to work until the reviews came out. We were at the Toronto Film Festival and the reviews started coming in. And I remember my sister was with me going: ‘Oh shit. Oh wow.’ It was only then I realised it was a blanket sweep of bad reviews.”

The setbacks, he says, make his role in Saving Mr Banks all the sweeter. A dramatised account of the making of Mary Poppins, this tear-jerking origins drama also starts Emma Thompson as the battle-axe author PL Travers and Tom Hanks as a beleaguered Walt Disney. A sure contender for multiple Oscar nods, the John Lee Hancock (The Rookie, The Blind Side) directed biopic is attracting some of 2013’s best notices.

“The really lovely thing about being part of this film was that it was great. And I knew it was great. It wasn’t even that the script was really extreme or brave or out there. It was just really tight and beautifully moving and very gently effective.

I’m just thrilled about it.”

“I’m happier to be a supporting character in this than I am about most of my lead roles,” says Colin. “It’s not about me. It’s about the fucking film. And that feels great. There’s no point in being decent in a shite film. And it’s really disappointing if you’re shite in a great film. But at least in that instance, the audience don’t leave the cinema talking about how shite you are – they might mention it – but mostly they just remember the great film they’ve seen. And with this film, a film that leaves you with such a good feeling, that’s even better.”

It’s great that Saving Mr Banks is attracting high praise for Colin and all his co-stars. But he’s keen to point out that reviews – and all the other publicity he has attracted along the way – doesn’t really count for much.

“I live in a world where I try to neutralise the good and the bad as much as possible. Otherwise I’d spend all day thinking about myself. And I can’t let that happen. Because that’s a default thing for me. I’m basically a five-year-old in a hairy man’s body.”

I make note of Grace Kelly’s film career, a CV that stretched to only 11 films over five years, and almost half of those were terrible. Isn’t Colin Farrell in a position where he’s a movie star no matter what? Isn’t he bigger than the reviews and the box office? Just ask Stewie Griffin.

“I can’t think that,” he says. “I remember the first time I was asked for an autograph on O’Connell Bridge, just after the second episode of Ballykissangel. And ever since then, I’ve had varying degrees of recognisability, depending on where I am in the world and what I’m doing. But I don’t feel a thing about it. I have to wipe my arse just like I’ve always had to wipe my arse. I wake up with myself every day. I know what my fears are. I know what my concerns are. I know what my bad habits are. So fuck fame, fuck autographs. There are far too many common concerns that I’m afflicted with and blessed with. I fret about my two boys and the things I can’t control. Like whether they’re popular in school or not. Fuck everything else. The kids never fade for me. All the other stuff does as soon as I step off the red carpet.”

He is, he swears, too busy with the kids to make time for a girlfriend. But, as he freely admits, he loves women. So how come one hasn’t pinned him down?

“It’s intense making time for the boys,” he says. “I mean I still get the odd random roll or leg-over. But I don’t even know where I’d go to meet somebody.”

“An actor and an actress together? Ah here. It works for some people. But Jaysus. You end up with four people in the relationship: two actors and two mirrors. You know what I mean? If I meet someone tomorrow, I’ll deal with it. I’ll work around it. There are always things that can be shattered with a moment’s grace.”