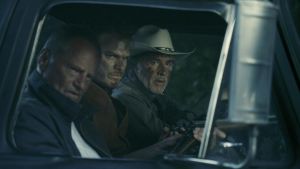 Jim Mickle has directed two pretty good films with Cold in July. The first is a rural noir (decorated with a very satisfactory second-act twist) that points us towards the work of James M Cain and Jim Thompson. The second is a deliciously violent revenge thriller with flavours of high-end exploitation cinema such as John Flynn’s Rolling Thunder and Fritz Lang’s The Big Heat.

Of course, there are ways of fitting these two genres together (indeed, they bleed into one another). But Mickle doesn’t find them here. A little over half way through, after following one thread, the film heads randomly in another direction and immediately jettisons any psychological consistency.

The reliable Michael C Hall plays an ordinary Joe whose life spins out of control when – more by accident than design – he shoots an intruder dead in his house. The man turns out to have been unarmed, but this proves no hindrance to a plea of self-defence.

Unhappily for Hall, however, we are in Texas, and that means a brother, son, uncle or father is sure to turn up seeking revenge. Dad soon appears in the rugged, charismatic form of Sam Shepard. Then something agreeably unexpected happens and, assisted by crazy PI Don Johnson, the two antagonists find themselves drawn together in common cause.

There is much to admire in the film’s textures. All three actors offer strong variations on their key personae: Hall is nervy; Shepard is hewn from oak; Johnson layers on the irony. The late 1980s setting (retained to allow a key plot point from Joe E Lansdale’s source novel) is convincingly maintained and only occasionally heightened to comic effect. Jeff Grace’s synth score throbs in ways of which John Carpenter would approve.

Still, that mid-point swerve makes no sense whatsoever. It would be lovely to see the missing halves of these two intriguing pictures. They must be out there somewhere.