Noble intentions may be behind the production of this privately financed Ukrainian history lesson, but that’s really no excuse 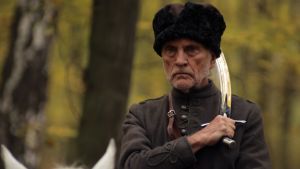 Oh my word. They don’t make properly terrible films on this sort of scale anymore. Encountering this epic monstrosity in the cinema is like coming across a lady selling choc-ices from a tray. Where’s Oliver Reed?

It takes only a few seconds for suspicions to emerge that Bitter Harvest was not financed in the traditional manner. The camera moves towards a Ukrainian village while a voiceover delivers an introduction of unparalleled glutinousness. In the “breadbasket of Europe”, seasons are, apparently, forever “waxing and waning” like the forlorn cry of the lesser-crested Cliché.

atch the honest locals dancing in crisply ironed traditional garb. Heed the arrival of Cossack Terence Stamp on a rearing horse. “They’ve killed the Czar!” he declares. “Now Ukraine can be free.” I don’t know about that, Terry.

Bitter Harvest was privately financed by wealthy Canadians of Ukrainian extraction and it bears all the traces of a patriotic vanity project. We should acknowledge the serious purpose at the core. The film sets out to educate about the terrible famine, largely caused by forced collectivisation, that killed many millions of Ukrainians during the 1930s.

If the project sends just one viewer to the history books, then it will have been worthwhile. But this is one monster of a dud.

The financiers have put Douglas Milsome, who operated the camera on Barry Lyndon, in charge of cinematography. Sadly, that patina of quality only serves to place the surrounding preposterousness in starker relief. We cut from starvation in Kiev to shots of Stalin swilling back red wine. We get some folk dancing.

Suggestions of conflict between Russia and Ukraine lead to images of quarrelling horses. There’s some more folk dancing. Endless hunks of history are intoned by absurdly healthy-looking citizens. What about a bit of folk dancing? Don’t mind if I do.

Nothing quite beats the scene in which Samantha Barks, playing an honest peasant girl, laces the evil commissar’s borscht with poisonous mushrooms. As he forces himself upon the poor woman, the screen breaks up into psychedelic shards and he spies his mother staring madly from a broken mirror. His mother? Am I missing a cultural reference?