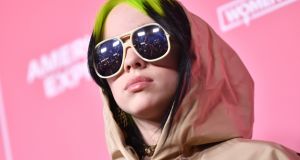 Billie Eilish will perform the theme song for the upcoming James Bond film No Time To Die, which iw to be released in April. Photograph: Emma McIntyre / AFP)

US singer Billie Eilish is to perform the theme song for the upcoming James Bond film No Time to Die, the singer and movie’s producers said on Tuesday.

Eilish, 18, will be the youngest artist to take on the task, following in the footsteps of top stars like Adele, Madonna and Paul McCartney.

“The #NoTimeToDie title song will be performed by @billieeilish. Billie has written the song with her brother @finneas and is the youngest artist in history to write and record a James Bond theme song,” a posting on the official @007 Twitter account said in Tuesday.

No Time to Die, the 25th film in the James Bond series, arrives in movie theaters in April with Daniel Craig resuming his role as the British agent for a fifth and final time.

Eilish had a break-out year in 2019 with hits like Bad Guy and is nominated for six Grammy Awards later this month, including album of the year and best new artist.

Eilish confirmed the news on her Twitter account with the simple message. “Billie has written and will perform the theme song for the 25th James Bond film.” The title of the song was not revealed. – Reuters

The real Sound of Music: Maria was no ‘flibbertigibbet’ and she didn’t teach the kids songs
8