Being Frank: The Chris Sievey Story – A look at the man inside Frank Sidebottom's head 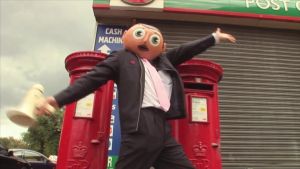 Chris Sievey aka Frank Sidebottom: Friends say that, when wearing the head, Sievey never talked in his own voice

There is much about this story that is strange. A documentary on Frank Sidebottom, the macrocephalic alter-ego of Chris Sievey, was always going to deal in oddities.

The loose inspiration for Lenny Abrahamson’s Frank (whose co-writer, Jon Ronson, appears here), Sidebottom was an unshakable presence in English popular culture from 1984 until his creator’s death in 2010. Speaking and singing in a nasal Lancastrian accent, he traded in a class of outsider art that skirted the line between quaint and sinister. He bellowed out versions of other people’s songs. He entertained a cardboard sidekick called Little Frank. So far, so bonkers.

This well-made, touching film does, however, remind us that Sievey’s story was, in some ways, grindingly familiar. When he found fame after years of struggle, he slipped into what cheap TV specials call “a spiral of drink and drugs”. He split with his wife and fell foul of the taxman. Sievey (or Sidebottom) could claim to be an archetypal superstar.

The early part of the film offers an engrossing study of the creative fecundity that gathered around Manchester in the post-punk years. Sievey was a furious Beatles fan who alternated the construction of weird fanzine-like material with the writing of punchy, power-pop songs for The Freshies.

That band almost had a hit with I’m in Love with the Girl on the Manchester Virgin Megastore Check-out Desk in 1980, but strikes at the BBC and legal wrangles did for its chances. The naïve, mildly creepy Frank Sidebottom – Sievey in a papier-mâché head – emerged shortly afterwards and never went away.

Steve Sullivan’s film unearths a fascinating haul of video, much of which has never been before the public. Sievey and his long-suffering, still-tolerant wife seem to have lived a happy – if mad – life in the early days.

John Cooper Clarke and Mark Radcliffe turn up with amusing reminiscences of those times. But the most striking sections are those that claw away some of the Sidebottom lore. Friends say that, when wearing the head, Sievey never talked in his own voice. This makes the hitherto unseen footage of Sievey speaking to the camera as himself after removing the disguise all the more eerie. It’s as if Elvis pulled off a Mission:Impossible mask to reveal an everyday truck driver.

Such was the mystique. An essential watch for both fans and for newcomers to Frankology.