Almost Christmas review: Danny Glover's getting too old for this sh*t

A family finds itself rudderless after granny passes in this comic soap opera. Grandpa, unfortunately, plays it straight 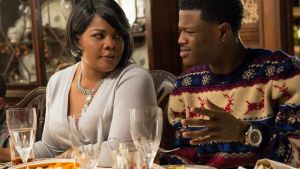 One could, without too much effort, compile a list of the century’s 10 worst films comprising Christmas entertainment alone. Nothing brings out Hollywood’s sappiest energies more effectively than the sight of holly and the scent of some foul American pudding that imposes too much condensed milk upon too much sweet potato.

Just such a confection is at the heart of this tolerable family drama from the director of the militantly appalling Baggage Claim. You wouldn’t call Almost Christmas a good film. Santa knows when you’re lying. But it has many more good bits than we might have expected.

An African-American family gathers in Birmingham, Alabama, at the end of the year that saw the materfamilias pass away. Each member is living some wonderful dream, has once lived a wonderful dream or is about to live a wonderful dream. This son is running for the House of Representatives. This son is about to be drafted into the NFL. A charismatic aunt sang back-up with every soul and rock superstar worth hearing. A younger daughter is harder up, but is looking forward to a career in the law.

You can’t fault the film for its efficiency. Each of these idylls is threatened by a problem that will be solved within a reasonably tidy running time. Most of the performances are also up to scratch. The fearsome Mo’Nique (though surely a tad young for her role) bosses everyone else off screen as the warbling aunt. Gabrielle Union wrestles with unresolved grievances as the budding lawyer.

Best of all, however, is the splendid JB Smoove – best known for playing Leon in Curb Your Enthusiasm – as a lascivious in-law whose self-regard is exceeded only by his self-delusion. Give this man a leading role.

Strange to relate, the weakest link is Danny Glover. The venerable actor looks to have missed a meeting and, oblivious to the comic soap opera around him, makes a genuine attempt to show us how a grieving widower might behave. Bummer! In a less silly film it might have been a brilliant performance.