A Date for Mad Mary review: the wedding zinger you’ve been waiting for 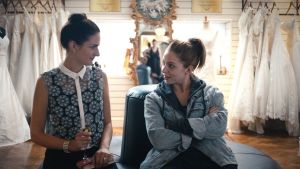 Love me tender: Charleigh Bailey and Seána Kerslake in A Date for Mad Mary

The triumphant first feature from Darren Thornton has the unmistakable shape of a conventional romantic comedy. (Indeed, it shares rudiments of plot with the recent, largely useless Mike and Dave Need Wedding Dates.) Seána Kerslake plays the titular young woman from Drogheda who, uneasy maid of honour to best pal Charlene (Charleigh Bailey), needs to find a date before the big wedding.

Adapted from Yasmine Akram’s play 10 Dates for Mad Mary – which Thornton directed on stage – the film works through the familiar mini-farces with irresistible comic gusto. Having already invented an intricate bio for an imaginary boyfriend, Mary, surprised on a first date, has to telepathically coax a virtual stranger into playing the part. The timing is spot-on. The jokes are never laboured. The conventions are largely honoured.

For all that, by the emotionally raw close, many viewers will have forgotten they were ever watching a comedy. A Date for Mad Mary has things to say about the new Ireland. It gets at the often-irrational dynamics of friendship. But it is most impressive as an exercise in character study. No sober realist drama has done a better job of finding such plausible flaws for such convincingly fleshy personalities. It would be unfair to burden the film with unmanageable praise, but there are a few 19th century Scandinavian playwrights who might envy Thornton and Akram their gifts for moulding personae.

Mary has just been set free from Mountjoy after serving time for assault. The film is careful to withhold information and ration its release at timely junctures. So, we don’t learn any specifics about the offense until we’ve come to know Mary and, even then, many questions are left unanswered.

It has, however, become apparent that our heroine is saddled with a fatally untameable anger. Each time her situation looks to be improving, some irresistible urge causes her to hammer the self-immolation button and send herself back to the emotional wasteland.

Surprisingly sweet excerpts from Mary’s intended speech at the wedding (later undermined by a cunning narrative coup) are, in voiceover, layered across the trip home to an indifferent welcome. “Things you need to know about Charlene…” Kerslake intones before describing her friend’s loyalty and resilience.

Sure enough, despite Mary’s history, Charlene still wants her at the top table. But things have changed. She and her friends have embraced the trappings of bourgeois conformity – dinner in the sort of place that serves steaks on slates – while Mary still favours al fresco cans of warm Bulmers.

A Date for Mad Mary takes a pleasing swerve in its later acts when Mary stumbles into a relationship with a musician called Jess (the super-cool Tara Lee). Should you wish to read Mary’s self-destructive urges as manifestation of a repressed sexuality, then that option is open to you, but the film does not seem at home to such simple solutions. Mary is a complex, clever, internally convoluted personality whose motivations are beyond economic summary.

The splendid Seána Kerslake – sharp edged voice emerging from soft features – arrives like a spinning top set loose upon a house of cards and continues to create glorious havoc throughout the film’s nippy 82 minutes. Bailey is equally good in a tricky role: a decent woman who becomes (to use the local parlance) a wagon when her friend threatens to undermine newly embraced values.

That talent has combined to create an entertainment that, while remaining deliciously accessible throughout, defies all familiar categorisation. In the year that also gave us Room and Viva, Mad Mary remains a serious contender for best Irish release of 2016.

No Netflix, I am not going to finish watching Schitt’s Creek
7