Patrick Freyne on the final, smiling day of Electric Picnic

Jumping between torrential rain and scorching heat all weekend long didn’t stop people having an amazing time at Electric Picnic this year, here are some of the highlights. 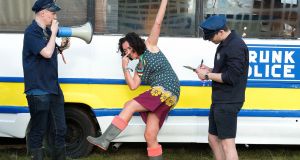 There are also people dressed as policemen monitoring the drunkenness of festival goers. These are not real policemen. Photograph: Dave Meehan/The Irish Times

On Sunday morning at Electric Picnic, tired festival goers are reinforced by daytrippers from beyond Stradbally.

You could tell who was who.

People who have been here all weekend are covered in mud, are humming LCD Soundsystem tunes and have the thousand-yard stares of Vietnam vets. If they have children – usually pulled in a little cart filled with night lights – those kids are now self-sufficient entrepreneurial plastic-glass collectors (you can get money reimbursed if you bring your glasses back).

In contrast, the newcomers are fresh-faced , relaxed and aren’t in a joyous state of high alert. Their children still needed parenting and can’t just be left to fend for themselves amid drunken Tipperary fans. “Amateurs,” whisper the veterans about the fresh troops from the mainland. “They won’t last five minutes.”

People make their own fun at Electric Picnic. There are people having sack races. A woman named Chris Warburton in the Greencrafts Area is carving a large squirrel. There is a young man who happily brained himself every night by leaping through a Hula Hoop (at Electric Picnic they call that “being a legend”).

At LCD Soundsystem, I watch a woman in a fur jacket walk by and a man begins to rub the back of her fur coat. “It’s like a furry wall,” he says. His eyes are like saucers.

“Ah Jesus, seriously,” says a concerned punter on seeing the foxes. But they aren’t real foxes either. Their costumes were created by talented artists Rachel Kieran and Carrie Lynam.

Over in the Trailer Park area, Donald Trump makes an appearance and Andy Howell of Richview Reit estate agents gives me a tour of a very “compact” caravan he is trying to let. The toilet and shower are all in one. The bed is at a fashionable 45-degree angle. “We’ve had a lot of interest,” he says.

“Is this social commentary?” I ask, suspiciously.

There is a fair bit of social commentary, not to mention petitions for good causes and NGO-hosted tents, but any notion that modern festivals can be counter-cultural is lost amid the massive branded billboards, overpriced pints and the sight of at least three Fine Gael ministers seeking relevance at Mindfield.

There seems to be a lot more younger adults this year (fair enough – it is a pop music festival), though at a press conference Festival Republic director Melvin Benn says he didn’t perceive any change in the demographics. He also says there are no plans to expand beyond 55,000 people next year, and that tickets will go on sale this Friday.

When asked by a mischievous reporter what he made of an opinion piece in this paper that the Electric Picnic is “twee”, Benn uses a bad word and jokes that the journalist may have been angry he wasn’t on the guest list.

Everyone laughs. Later, on being asked about future improvements to the festival, Benn says: “I’m going to make it less twee.”

Everyone laughs again because we see what he did there.

The aftermath: all the news and features from the best music and arts festival of the year