‘Editing is my natural role’

Declan Meade has made it his business to find our finest writers, and his 15 years at The Stinging Fly make for formidable reading 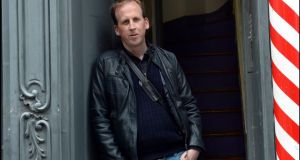 Every reader of international fiction will know the feeling. It descends like a mist: mysterious, slightly annoying but enticing. It’s the hunger that comes from reading a work that has been translated from another language and then, eager to read more by its author, realising to your dismay that the writer’s other books have not yet been translated.

Anyone with an interest in discovering new fiction in Ireland will already be familiar with Declan Meade. Tireless and dedicated, unassuming but committed, he is a literary champion of old-school generosity and the publisher/editor and co-founder of The Stinging Fly.

The Fly is now a literary journal in format, with each issue averaging more than 120 pages. Meade, with characteristic modesty agrees: “Yes, it has become a bound journal but I still think of it as a magazine.”

It’s been 15 years since Meade introduced his forum for new writing. “I had been writing and was in the company of other aspiring writers. I could see that a place was needed, an outlet. I was 26, but the first issue came out in March 1998, when I was 27,” he says.

He pauses and then smiles, waiting, with his habitual expression of kindly exhaustion. Meade is now 42, and has the demeanour of a patient uncle. He is the editor writers must dream of finding – Kevin Barry and Mary Costello will confirm this.

The latest Fly, the 43rd issue, is dedicated to translation. It features works from 13 countries, including a piece by former Impac winner Tahar Ben Jelloun, as well as an interview by writer Philip Ó Ceallaigh with Robert Chandler, translator of Vasily Grossman and Andrey Platonov. It is Meade’s response to the always contentious area of literary translation.

“In Ireland writers tend to worry about getting published, but being translated is almost as big a problem, as Irish-language writers will endorse, and bigger still for non-English language writers. And it’s not until you travel abroad that you fully realise it.” He has written about this in his introduction to the translation issue, which he co-edited with Nora Mahony, founder of the Dublin-based literary translation agency Parkbench.

The inspiration for the issue came while Meade was at the Bucharest International Festival of Literature in December 2011. “I can remember being challenged by speakers from the floor about my attitude as a publisher towards non-English language work and my efforts, if any, on behalf of translation. I came away with an idea about a translation issue.”

Found in translation
Accessibility raises huge questions and translation is complex, even fractious, as is well explained in a candid essay by Claire Kilroy, who discovered that meaning can, and does, get lost in translation. The gifted literary translator is not only a skilled linguist; he or she is also an instinctive writer.

New writing flourishes through a rare breed of reader brilliantly represented by Meade, who began his literary life by “reading everything in the school library and then moving on to the local library”. He is the fifth child of eight, born into a farming family in Ardee, Co Louth – “I have four older brothers” – and was not destined to take over the family farm. He smiles at the thought of it. He looks an unlikely farmer, and was never interested in sport.

“Although there were attempts made to involve me, they all failed,” he says, referring to his football-loving father and brothers. He was instead “a good all-rounder at school”, though sometimes he had a strained relationship with the English teacher.

As the first family member to consider university, Meade recalls his mother saying: “You don’t have to go if you don’t want to.” But he did, and travelled north to the University of Ulster at Coleraine to study English and media. He abandoned the English course, though, for European Business Studies, and as part of his degree he studied German.

“I spent a year in Bavaria where the German spoken is that bit different and I really enjoyed the process of becoming more fluent in something I already knew.”

It seems it was while travelling through Germany that Meade became aware of the fluidity of language. He recalls reading Márquez’s Love in the Time of Cholera in a German translation. Nuance and tone are among the qualities he looks for in the new writing he spends his days reading in an office overwhelmed by books and paper.

Nurturing writing is a vocation. Meade does not read as much contemporary fiction as he would like; he is too busy reading unpublished writings. He admits he considered changing his life a few years ago. “When I was 37, 38, I contemplated taking up something different as I approached 40.” On crossing that frontier, he realised “that no, this is what I love doing”.

There is nothing defiant about his belief in his writers, but he takes pleasure in their success. There also seems almost an element of divine justice in Kevin Barry’s recent Impac triumph. Meade is an admirer of the prize and its highlighting of fiction in translation, while Barry has benefited enormously from Meade’s vital early support including the publication of Barry’s debut collection, There Are Little Kingdoms (2007).

Literary journals have been an influential conduit for writers for close on 200 years. Meade had researched literary publications in the US, “particularly their means of survival”, before going there on reconnaissance. Some years earlier, shortly after graduation, he acquired a Morrison visa and set off to stay with friends in Atlanta, Georgia. He spent a year there working in a large independent bookstore.

‘Natural role’
Meade returned to Ireland and worked in the James Joyce Centre in North Great George’s Street. Having stopped working full-time to write, he then decided to start The Stinging Fly in late 1997.

He recalls visiting the Ploughshares office in Boston. First appearing as an independent publication in 1971, Ploughshares also publishes thrice yearly. Its artistic ethos appeals to Meade, as does its practice of inviting guest editors – one which he has adopted. “Of course I was interested in writing my own fiction and I was delighted when I had a short story published but I realised there was a place for the reader and I am a reader. Then I became aware of the importance of editors, and was to discover that editing is my natural role.”

The reader and editor, according to him, are part of the writing process. He is a traditional editor and works closely with his writers, mainly in the form of discussion. “It’s all in the suggestion,” he says.

By 2005 The Stinging Fly, then in its new journal format, had published its first book, Watermark by the Derry-born Sean O’Reilly. Close on a dozen books and anthologies have since followed, including Michael J Farrell’s first collection of stories in 2009. With a print run of 1,000 copies per issue, The Stinging Fly is sold by subscription and Meade is conscious that a substantial number of copies go abroad.

So how does he feel about writers such as Kevin Barry being taken up by publishers abroad? “It’s great. It means I’ve done my job and we can move on to the next emerging writer as in the case of say, Colin Barrett, whose collection, Young Skins, we are publishing in September.”

1 Claire Keegan’s Foster was initially written for the second Davy Byrne’s short-story competition, organised by Meade in 2009. The story was subsequently published in the New Yorker and later in an extended version by Faber & Faber.

2 Kevin Barry’s subversive and astute debut collection, There Are Little Kingdoms (2007), evolved from Meade’s suggestion that Barry get some stories together “and maybe we’ll publish a book”. The rest, as they say, is history.