If there is ‘even a leg bone ... belonging to Yeats, that’s fine by me’ says society president 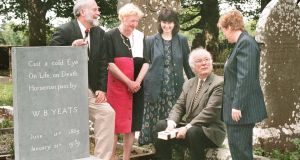 File photograph of speakers, including the late Seamus Heaney, at the 38th Yeats International Summer School in 1997 on a visit to the grave in Drumcliffe. Photograph: Matt Kavanagh

Yeats Society president Martin Enright has said that he is not unduly surprised or upset about new doubts over the authenticity of WB Yeats’s burial in Sligo.

“If there’s a skull, or even a leg bone in the Drumcliffe grave belonging to Yeats,that’s fine by me,“Mr Enright said.

Mr Enright, who was commenting on the newly discovered correspondence between French diplomats published in The Irish Times on Saturday, said there had always been questionmarks over Yeats’s remains after they were brought by ship to Sligo from France.

“I met an officer from the Naval Service ship LE Macha 25 years ago, who spoke about it then, and there is still a plaque to the poet at Roquebrune where he was originally buried,” Mr Enright said.

“The point is that Drumcliffe has become hallowed ground, it is where his great-grandfather was a rector, and it is where he always wanted to be buried,” Mr Enright said.

Dean Arfon Williams, who is acting archdeacon of the diocese of Elphin and in charge of Drumcliffe, said that only DNA testing could prove or otherwise that Yeats was buried in the Co Sligo graveyard.

“Unless Yeats’s family applies to the courts for an exhumation order and gets DNA testing carried out, that is unlikely to happen – so we should just leave the poor man alone,” Dean Williams said.

“And unless bones are found in France that are proven to be his, this is still just speculation,” he said.

Labour Party senator Susan O’Keeffe, who is chair of the Yeats 2015 celebrations to mark the 150th anniversary of the poet’s birthday, said his wish to be buried in Drumcliffe “does seem to have been clear” and Sligo was his “spirtual home”.

“Reading the correspondence between the French diplomats and the pressure they would have been under from Yeats’s widow, George, it must have been an unbelievable drama at the time,” Senator O’Keeffe said.

“However, I do feel for his family,as this renewed controversy must be difficult, and it doesn’t change the truth of his love for the place,” she said.