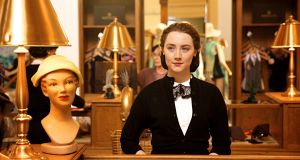 This year we learned that the Irish are coming. Yes, I know. It looks as if we will see the most Irish Academy Awards ever. Independent bookies have John Crowley’s lovely Brooklyn and Lenny Abrahamson’s unsettling Room in the frame for best picture. Saoirse Ronan will get in for Brooklyn. Michael Fassbender will be there for Steve Jobs. Also look out for Paddy Breathnach’s Viva – a gay drama filmed in Cuba – to figure in the race for best foreign-language film.

Away from the Oscar contenders, we also saw such fine Irish films as Queen of Ireland, Patrick’s Day and I Used to Live Here. The Irish are already here.

We learned that there were as many steps backwards as forwards for women in cinema. Some months before Abbeygate kicked off, the Cannes film festival got in trouble by launching a “year of the woman” and then allegedly turning away female guests from premieres for not wearing high heels.

Women are still appallingly represented among directors. But we can at least report that an unprecedented number of the year’s best films centred on female protagonists. Look to Peter Strickland’s sexy The Duke of Burgundy, Todd Haynes’s beautiful Carol, Sean S Baker’s Tangerine and, of course, Brooklyn.

All that said, Jurassic World, the most successful film of the year at the time of writing, cast Bryce Dallas Howard as a damsel in distress who runs after Chris Pratt in, yes, high heels. It all ties together. The studios have still not escaped from caveman thinking.

We also learned that many of the best cinematic minds were turning weird. In this paper, among our 10 best films, we listed The Duke of Burgundy, A Pigeon Sat on a Branch Contemplating Existence and the sideways hip A Girl Walks Home Alone at Night. Ana Lily Amirpour, the young Iranian-American director of that last film, gives us all hope.

Unbreakable Kimmy Schmidt: Daring sitcom about a woman recently released from a doomsday cult. The Mary Tyler Moore Show of its day.

Natalie Prass by Natalie Prass: The chamber pop genius actually recorded the LP back in 2012. The year’s most sinuously melodic record.

Epic by Kamasi Washington: An extraordinary jazz, erm, epic that combines the sounds of John Coltrane with some very unfashionable effects.

The Duke of Burgundy: Delightfully odd tale of two kinky female lovers in a heightened version of an imagined Mitteleuropa.

Round Britain Quiz: It’s an ancient institution. But we feel the need to recommend BBC Radio 4’s brilliant cryptic quiz.

Bob Dylan’s The Cutting Edge 1965-1966: Out-takes from his greatest years. The bumper edition has 20 takes of Like a Rolling Stone.

They All Love Jack by Bruce Robinson: The director of Withnail and I has written a huge, mad, paranoid Jack the Ripper investigation. An unreliable essential.