Doctor Who should be a woman. Well, an alien in female human form 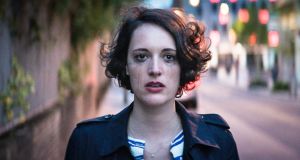 Phoebe Waller-Bridge (in Fleabag): the next Doctor Who?

Remember when Phoebe Waller-Bridge was the next Doctor Who? It is hard to imagine more persuasive evidence of the dizzying speed at which the 21st-century rumour mill operates.

Following her triumph on the BBC comedy series Fleabag, Ms Waller-Bridge – who has a singular gift for comic perplexity – became the hottest of hot properties. She was soon ushered into the Star Wars universe for the upcoming Han Solo origin film (now officially a “troubled production” after losing its directors mid-production). When Peter Capaldi announced he was leaving the Tardis, talk began about a possible female replacement. Some dialogue in recent episodes pointed in that direction.

Then, on Tuesday evening, unfounded speculation turned into, well, mildly founded speculation. Evan Davis ended Newsnight with a segment addressing the rumoured arrival of Waller-Bridge to the BBC’s venerable science fiction series. Footage of her refusing to answer the question was included. The sequence ended with Waller-Bridge’s head being dissolved in imitation of the series’ regeneration process.

It seemed pretty clear that the producers were doing no more than addressing the gossip. If the people at Newsnight really had been let into the secret, then they almost certainly wouldn’t have run the segment. Indeed, its inclusion surely confirmed that they didn’t know.

No matter. By the following morning the Guardian was asking: “Is Phoebe Waller-Bridge really the new face of Doctor Who?” Somebody once said that if a headline asks whether something is so then that thing almost certainly isn’t so. At lunchtime, an unambiguous tweet arrived from DryWhite, the actor’s theatre company, reaffirming the wisdom of that old saw. “We can confirm that Phoebe is not the next Doctor Who. Pls save the betting people their money! Thanks,” it said.

At time of writing, William Hill still had her at a tight 9/4, but Olivia Colman at 20/1 now looks like better value among the female contenders. The solid, uncomplicated Kris Marshall remains favourite at 7/4.

Waller-Bridge was “the next Doctor Who” for about 14 hours. In the olden days (about 10 years ago) this would scarcely have given the Whovians pause to clear their throats. By the time DryWhite sent its tweet, the contemporary world was already a bit sick of the story. We’d wondered whether it was right that another privately educated actor – St Augustine’s, Ealing and Rada – should be grabbing such a plum job. Those eager for a more serious Doctor Who moaned about yet more comic actors taking control of the police box. And, of course, there were complaints about a fictional alien who travels through time and lives eternally becoming something more like a human woman than a human man. Because that’s a problem.

“Got to continue the programme of airbrushing men out of existence, except where they are needed to play criminals or homeless people or cannon-fodder or something,” Dathon wrote beneath the Guardian article. He went on to claim that – news to me – the show was “largely aimed at young males”.

Let me stress a continuing issue with the digital world. Social media users are prone to taking offence at things they haven’t actually heard or read. When Zendaya, African-American Disney star, was cast as love interest in Spider-Man: Homecoming, the wires were flooded with decent people complaining about the many racist objections. Few of these folk seemed to have read any specific whinges, but they were sure they were out there. The film arrived last week and there has been scarcely a peep from the supposedly outraged.

So it’s easy to overinflate the levels of fury at such potential attempts to change the gender of a fictional character. There really is, nonetheless, a mass of aggrieved men who regard any such move as evidence that the Monstrous Regiment is committed to hacking off all dangling genitalia and installing H Rider Haggard’s She Who Must Be Obeyed as world ruler. The “Men’s Rights Movement” rewrites sociology to make women the oppressors. Newspaper articles argue that “straight white males” are now the real victims. Online campaigns get in a tizzy about “Social Justice Warriors” imposing feminist ideology on video games. What are they all so frightened of?

It is a good idea to recast Doctor Who as a woman. Waller-Bridge would have been excellent. Olivia Colman would be better. I’d particularly like to see Miriam Margolyes have a crack. The mythology allows it and the time has come. Almost as important is the fact that it will greatly annoy the hard core of MRM Whovians. Let’s go further. Let’s make James Bond, Jason Bourne, Captain Jack Sparrow and King Kong a woman. It would be worth it just to hear the meninazis squeal.

Or have I gone too far?

Kesha: ‘If you say the wrong thing now, your career is #cancelled’
4

Justin Bieber: Seasons – No bum. But he does seem terribly bummed out
8