Great theatre tends to give suicide a power and a glamour it must not be given in society. With ‘Four Last Things’, Lisa Tierney-Keogh attempts to make a play about a suicide that does not give the act meaning and drama but still works as theatre 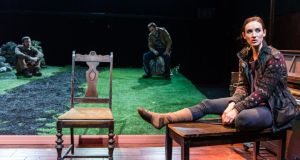 At the dark and quiet level of everyday life the great drama of Irish society is suicide. It is the ultimate act: irreversible, unfathomable, devastating. It cries out for the kind of meaning that art can infuse even into the most meaningless acts. The public space of the theatre is one of the arenas in which we might expect this pain to be enacted. Yet suicide is very hard to put on the contemporary stage – paradoxically because it is so tied up with the history of theatre. And tied up in highly problematic ways. Great theatre tends to give suicide a power and a glamour that it must not be given in society.

Of the 32 extant Greek tragedies, 13 feature the suicide of a prominent character. From Sophocles’s Ajax to Euripides’s Phaedra, the taking of one’s own life is not seen as itself shameful; on the contrary, it is the escape from shame. Death is always preferable to dishonour, whether that dishonour is sexual and female or political and male. Taking one’s life is a grand redemptive act, a way of cleansing oneself in death from all the grime of life. For women it is the ultimate source of power in a male world: in one of the great moments of personal and political defiance, Antigone uses it to defy King Creon. Killing herself is a woman’s most eloquent statement of personal autonomy.

Almost always, in the classical plays, when suicide happens it is the “right” thing to do. And this notion becomes part of the DNA of western theatre. Self-annihilation is, in purely dramatic terms, immensely satisfying: it is the embodiment of closure. How would we feel if Othello, instead of taking his own life after killing Desdemona, or Cleopatra, after Antony’s defeat, meekly submitted to capture? Or if Romeo and Juliet, finding each other, as they think, dead, got up and wandered off without re-creating their union in death?

In Camille O’Sullivan’s superb performance of The Rape of Lucrece the victim’s suicide felt aesthetically right, even for a contemporary audience that does not share the assumption that a woman who is raped has been indelibly dishonoured. And, of course, this feeling persists into much later theatre: even though we may know better intellectually, we are satisfied by Hedda Gabler’s decision to end it all with her father’s pistol. We can’t shake off the feeling that in this moment she regains the free will that has been lost to her.

Even when suicide on the stage is utterly bleak it is very hard for it not to be epic. Marina Carr’s plays Portia Coughlan and The Mai could never be accused of glamorising the self-inflicted deaths of their female protagonists: the context is relentlessly unheroic. Nonetheless, the language, the movement of the drama, the undercarriage of Greek and Irish mythology, all give these deaths a sense of scale. They matter – as, in a work of art, they must.

Equally, a powerful recent piece such as Bush Moukarzel’s Lippy has an inescapably epic effect simply by virtue of its subject: the decision of an elderly woman and her three nieces to slowly starve themselves to death feels monumental.

What works in the theatre, though, doesn’t necessarily work for the real world. The real world’s overwhelming interest is in stopping people taking their own lives. It is in taking the drama out of suicide, reminding anyone who is vulnerable to the idea that it is not a performance. It has no second night. It doesn’t redeem anything or solve anything or give anything meaning. It doesn’t even provide a neat sense of closure: the pain goes on for those left behind. Theatrical suicides may be great art, but they are terrible examples.

Is it possible to make a play about a suicide that does not give the act meaning and drama but that still works as a piece of theatre? I recently saw Lisa Tierney-Keogh’s Four Last Things in a terrific off-Broadway production, in New York. (Tierney-Keogh won the Irish Times ESB Irish Theatre Awards bursary in 2002, and Four Last Things was originally staged at the Dublin Fringe in 2009.)

It is a very brave and intelligent attempt to grapple with this question. Tierney-Keogh opts for a very simple style of intercut monologues in which three characters relate from their own perspectives the lead-up to a suicide. Jane, a student in Dublin who is living with depression, has returned to her remote family farm, where she is watched with inarticulate alarm by her father and her dog. Nothing big happens; there is just a gradual, beautifully calibrated slide into inner isolation and despair.

Tierney-Keogh’s answer to the inherent problem of telling this story without ascribing false meaning to it is to evoke not so much what happens as what does not happen. There is a dark irony of inarticulacy: the dog, which sees what is happening, cannot speak, and the father who can speak has no words for what he feels and fears. The mood is poignant, sombre and, in Chris Henry’s elegant production, carefully restrained. There is no real drama – an absence that is usually a cause for complaint but that in this instance is largely the point.

The only meaning to suicide is that it happens and that it is terrible. That’s not what great plays say, but it is what people need to hear.

Level 5 lockdown TV: From The Crown to Dead Still, the ultimate guide to what to watch
4