Culture Shock: Peter O’Toole – a great actor undazzled by his own star

The late actor’s approach was sceptical, cool, intellectual. He was, at his best, almost a meta-actor 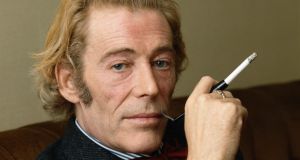 Five years ago I was trying to catch a boat across the River Plate from Uruguay to Argentina. For some reason I couldn’t grasp, the Uruguayan customs officers were in a foul mood. They seemed intent on holding everyone up with barked questions, and those of us in the long queue were getting anxious that we would miss the boat. At the head of my line was a particularly sour-looking middle-aged woman who seemed to be pursuing a personal vendetta against the world. As I shuffled to the head of the queue she threw me a Medusa glare.

The boat was sounding its final warning to embark. She snatched my passport with a withering gesture of contempt. Then a big beacon of a smile lit up her face and she turned its full wattage on me. “O’Toole,” she said. “Como Peter O’Toole?”

I smiled back knowingly, letting the possibility linger that yes, indeed, I was one of those O’Tooles. She waved me by on to the boat, leaving the rest of the sweltering queue stranded.

For most of my adult life a very distant star has shed the tiniest ray of light upon me. In all sorts of places, from Kenya to Bangladesh to Savannah, hotel receptionists, immigration officials or taxi drivers would hear my name with momentary incomprehension and then the little light bulb would go on: “Oh, like Peter O’Toole.” (For some reason the only place this has not been true is China.) And every time this did happen there would be a little reminder of what a star is, what it’s like to have a name that radiates so widely that even to be associated with it by pure coincidence is to be slightly less obscure. Peter O’Toole was that kind of star.

Yet he was also wonderfully, mischievously perverse, a great defier of his own fame. One of my favourite moments of Irish theatre is not a play. In October 1984, when the Gaiety Theatre in Dublin held a gala performance to mark its reopening after refurbishment, Peter O’Toole was invited to do the opening turn. Presumably, the expectation was that he would do a bit of Shakespeare, perhaps, or a Yeats poem. He decided to read, slowly and deliberately, Jonathan Swift’s A Modest Proposal, with its suggestion that the children of the Irish poor be sold as food for their landlords, “who, as they have already devoured most of the parents, seem to have the best title to the children”.

Some members of the dress-suited audience began to heckle; others walked out. RTÉ, which was broadcasting the show live, cut O’Toole off in the middle of the reading and went to an ad break. The Irish Times reported next day that it had received “a number of calls, which were preponderantly critical of O’Toole”.

It was magnificent, perhaps the best public tribute ever paid to Swift. And it was a great expression of the other side of the star: O’Toole’s biting, roguish intelligence. He had his own Swiftian side, a savage, satiric indignation, brought out in what, to me, is his greatest film performance, as the mad Lord Jack Gurney in Peter Medak’s cinematic adaption of Peter Barnes’s The Ruling Class. It is the performative equivalent of Swift’s writing: full of comic inflation, dazzling ventriloquism (Jack has multiple personalities), astonishing inventive energy and a ferocious rage at the British class system. It is generally referred to as a “bravura” performance, which it is, but it is rooted in the moral and political convictions of a man who called himself an “ocean-going, copper-bottomed, triple- distilled socialist”.

Was there a fundamental contradiction between these two sides of O’Toole: the megastar and the satirist? Perhaps, but it was not as wide as it might appear. Much of the British commentary on O’Toole since his death has painted him as a rather anachronistic actor, a 19th-century heroic performer in an age of method psychological realism. It is certainly true that, with his fellow so-called Celts Richard Burton and Richard Harris, he was a rebel against the new method orthodoxy. What is not true is the general depiction of the trio as Romantic, emotional, hot-blooded Celts at odds with the realism that was in the ascendant from the 1950s onwards.

Quite the contrary: O’Toole’s acting, like Burton’s, was sceptical, cool, intellectual. Far from being a fruity thesp, he was, at his best, almost a meta-actor. His best screen performances all comment on the nature of performance. Jack Gurney is taught how to perform the role of a “sane” aristocrat.

Of O’Toole’s other best roles, two (in My Favourite Year and in Venus) are satiric portrayals of washed-up actors and one, in The Stunt Man, is a satiric portrayal of an insane film director. O’Toole’s best performances have quotation marks around them.

But what of the role that created the star in the first place? It too is a “performance”. O’Toole’s Lawrence of Arabia is so uncannily beautiful, so eerily mesmerising that you almost don’t notice that he’s just another actor: a strange Englishman, dressed in foreign clothes, pretending to be an Arab. O’Toole’s brilliance is to create a man who is utterly convinced by the role he is playing. But he himself was never so convinced: what made him great was the keen, appraising intelligence with which he seems to stand outside himself, undazzled by his own star.

The Music Quiz: What song did the BBC say was 'too depressing' to play?
3

Collops and fíbíns: The lost language of Ireland’s landscape
8

The Celtic Myths: A Guide to the Ancient Gods and Legends
10

What's on the cards?
Real news has value SUBSCRIBE