The enduring Young Ireland school of Thomas Davis, Charles Gavan Duffy and approached history as a way to foster a national spirit 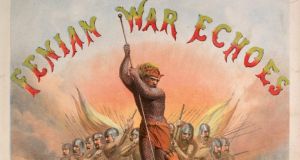 Book Title:
Young Ireland and the Writing of Irish History

‘In every generation the Irish people have asserted their right to national freedom and sovereignty: six times during the past three hundred years they have asserted it in arms.”

Pádraig Pearse and his fellow signatories of the 1916 Proclamation never specified the six rebellions they had in mind. There is scarcely any doubt, however, that the Young Ireland rising of 1848 was one that the Proclamation regarded as an “assertion in arms” by the Irish people. As a rebellion it was a damp squib, a minor and in ways farcical affair with no executions or martyrs.

The significance of Young Ireland does not depend on that botched attempt. Young Ireland’s pen was far mightier than its sword, and that is the subject of James Quinn’s important new book. Thomas Davis, Charles Gavan Duffy and John Blake Dillon published the first issue of their weekly paper, the Nation, in October 1842. It soon established itself as the most popular and influential nationalist paper in 19th-century Ireland. Its watchword was “Educate that you may be free”.

This education was to be largely concerned with the history of Ireland – a narrative of Ireland’s past that should be patriotic, spirited, and inspirational, not scholarship for the sake of scholarship, not weighed down by dry documentary evidence. History was to be taught and propagated as the most valuable way of fostering a national spirit.

The founders of the Nation appointed themselves the schoolmasters of the nation, teaching and repeating the doctrines of nationalism in every edition of their paper, in every ballad and every book they published. The heavy emphasis on history was a new development in Irish politics. In this the Young Irelanders were very much in step with contemporary intellectuals all over Europe, who held that historical consciousness was the essence of nationalism.

One of their favourite mentors was the French historian Augustin Thierry, whose History of the Conquest of England by the Normans praised the heroism of Ireland’s long struggle against a brutal conqueror. Thierry described the centuries of Irish resistance as the “most singular and noblest example ever furnished by any people in the world”.

This was music to the ears of Young Ireland. They saw history in terms of conquerors and conquered, and the word “conquest” was never far from their minds. John Mitchel’s influential book on the Famine was called The Last Conquest of Ireland (Perhaps), and James Fintan Lalor claimed that his aim was to repeal not the Union but the Conquest.

Quinn’s book is a well-researched, well-written and balanced study of the ideas and writings of Young Ireland. The structure and layout of the chapters deal in succession with the environment in which they began their mission; their reading of history; their writing of it; the uses they made of the past; their attempt to make history for themselves; the narrative they wrote of their own times; how their work was continued by later writers; and, finally, their legacy.

While this sequence is logical, inevitably it is open to repetition, since the themes propagated by Young Ireland were endlessly reiterated. It becomes difficult, therefore, to assign one chapter to the writing of history and another to the use of it without some restatement of their basic ideas. A separate section of biographical notes provides useful information on the numerous writers named in the text. (A typographical slip in the table of contents refers to this section as “Bibliographical Notes”.)

In conjunction with the Nation, Davis and Duffy also launched the Library of Ireland. The objective was to provide a national literature in history, poetry and fiction. The first of the historical narratives dealt with such topics as the Nine Years’ War, the Plantation of Ulster, the Confederation of Kilkenny, and the Volunteers of 1782. The authors were John Mitchel, Thomas McNevin and the Rev CP Meehan.

These vividly written books sold cheaply for a shilling each, making them available to a wide readership. The topics chosen illustrated the struggle to cast off foreign rule and assert Ireland’s freedom.

Davis held that the “highest duties of history . . . are best taught by a Ballad History”. By far the most popular work published by the Library of Ireland was the collection of historical ballads known as The Spirit of the Nation. Davis himself wrote almost 50 ballads, including the rousing A Nation Once Again, The West Asleep and Fontenoy. John Kells Ingram wrote The Memory of the Dead (better known, perhaps, as Who Fears to Speak of Ninety-Eight?). James Clarence Mangan, while refusing to subordinate artistic to political considerations, was induced, nevertheless, to contribute Dark Rosaleen.

Both Duffy and Davis recognised the publication of the ballads as “our most unequivocal success”. Quinn makes the valid point that the ballads were also their most enduring contribution to the popularisation of Irish history. The Spirit of the Nation, first printed in 1843, had its final and 97th edition published in 1934.

The themes of the ballads, history texts, and essays all came from the same hymn book: the glories and heroism of the past; the centuries-old struggle for freedom; the crimes and libels of the English oppressors. Though often vanquished, there was no shame in defeat, only pride in unwavering resistance and the continuity of the struggle. Such was the mythology of Young Ireland’s nationalism.

Mitchel’s books in the 1860s and Gavan Duffy’s in the 1880s and 1890s, with contributions from several other pens, maintained and nurtured the Young Ireland tradition of history writing. In the early 20th century, Arthur Griffith was one of its foremost advocates and practitioners. Despite criticism from professional historians and others, it survived and flourished well beyond the establishment of an independent Ireland.

The notes for teachers issued by the Department of Education in 1934 advised that every school library should have the books originated by Young Ireland. Teachers should encourage their students to sing and recite the historical ballads with “spirit and vigour”, since these “not only crystallise historical knowledge but they make an emotional appeal to youth such as is beyond the power of prose”.

Irish nationalism, according to Pearse, had four evangelists. Significantly, three of them were Young Irelanders: Davis, Mitchel and Lalor. The fourth, Wolfe Tone, was elevated into a hero by their writings. Given the movement’s influence on Pearse and his generation, it could be argued that 1916, and not 1848, was Young Ireland’s real rebellion.