Young adult and children’s books: bodily functions and recipes for dealing with life

Reviews: ‘The World’s Worst Children’, ‘A Library of Lemons’, ‘Caramel Hearts’, ‘Paper Butterflies’ and ‘If I Was Your Girl’ 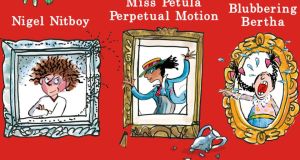 The best children’s writers have always known that their audience are far from wholesome and innocent, and that they revel in depictions of misbehaviour. Whether it’s Naughty Little Sister eating all the trifle at the party or Veruca Salt throwing a tantrum in a chocolate factory, readers are thrilled by the tales of children who do the wrong, yet tempting, thing.

David Walliams, often lauded as this generation’s Roald Dahl, follows suit in his latest book, The World’s Worst Children (HarperCollins, £14.99). Introduced by newsagent Raj, who will be familiar to Walliams’s readers, these 10 stories depict the most appalling children you could imagine.

Windy Mindy is dubbed a musical prodigy when her “bottom burps” find their way into a tuba, while Peter Picker’s proclivities lead to a “snot-sphere” that envelops global landmarks on its journey round the earth.

Even though the humour largely relies on bodily functions, there are some shrewd observations about character and education. There are also some wonderful asides: a sad clown figurine is smashed, but unfortunately “there isn’t time to fully explore the clown’s emotional state”. And although Walliams includes an obvious moral every so often – tidy your room or the Rubbish Monster will get you – he is mostly on the side of aspiring young superheroes such as Nigel Nitboy. Illustrations by Tony Ross and some playful typography make this a book for ages eight and upwards that is not only entertaining but also beautiful.

For slightly older readers less amused by toilet humour (or pretending to be), food seems to be a recurring theme to draw readers in. Jo Cotterill’s A Library of Lemons (Piccadilly Press, £5.99), for readers aged 10 and over, introduces us to Calypso, a quiet girl whose father has been working on a “history of the lemon” and whose only connection to her dead mother is her library.

Although Calypso tends to prefer books to people, she quickly bonds with the confident, cheerful Mae over their shared love of stories. The enthusiasm and joy leap off the page until we realise that all is not well in Calypso’s house, and that grief has left her adopting the parent role in her family.

“Dad’s a big believer in inner strength,” Calypso tells us early on, but as the story progresses she learns that sometimes losing yourself in a story or having inner resolve aren’t quite enough in life. Cotterill handles a difficult subject with care and tact, offering hope without getting sentimental.

This capacity to balance optimism with the realities of tough situations is a key skill for authors for young people. Irish-based ER Murray demonstrates this skill in her teen-fiction debut, Caramel Hearts (Alma Books, £7.99), another food-related title that intersperses its narrative with cake recipes. This could come off as twee, but Murray’s heroine, 14-year-old Liv Bloom, is anything but fluffy. Her mother is once again in rehab for her alcohol addiction, while her older sister has dropped out of university to make up for their absent parent. Tensions are high, and Liv carries the legacy of being blamed by her mother for her father leaving. Her guilt is both authentic and heartbreaking, and her struggles with baking prove a welcome relief. The novel also reminds us that not all teen heroines are comfortably middle class: Liv’s ability to get her hands on baking ingredients involves some guilt-inducing thievery and turns this into a nuanced exploration of how life looks when every single penny is counted and when support isn’t always available for those who need it.

While it is by no means food-themed, the title Paper Butterflies, by Lisa Heathfield (Electric Monkey, £7.99), seems to promise something much more frivolous than what this YA novel offers up. Loathed by her stepmother and stepsister for being mixed-race – or perhaps just for being a reminder of her father’s first wife – June endures physical and psychological abuse, while her father seems oblivious. Trying to speak up only makes things worse: “I’ve told him, just the beginning, but he doesn’t want to hear.”

June’s only salvation is the woods, where she finds freedom with a boy named Blister. Occasional flash-forwards suggest that she does escape her family life in the future, but it’s only much later that we discover how, and what it has cost. Readers hoping for a sweet love story will be more than a little shocked by the swerve the plot takes, and Paper Butterflies is all the better for it.

Meredith Russo’s If I Was Your Girl (Usborne, £7.99) veers towards a cute love story at times, though with a twist. Amanda was identified as male at birth, and now, at 18, a new school offers her first chance to be seen as the girl she’s always known she was. Transitioning for her means “living her truth”, but how honest is she being with her new boyfriend if he doesn’t know about what she’s been through? “For the first time ever I was living my life,” Amanda reflects, “the life I was supposed to live – I was finally the truest version of myself. I just happened to be keeping an enormous secret at the same time.” Transgender stories are not new to YA, but Russo is one of few trans authors writing them, and this authentic voice – even if the story it tells is overly optimistic – is a very welcome addition to the field.

Claire Hennessy’s latest YA novel is Nothing Tastes as Good. She is also an editor and creative-writing facilitator