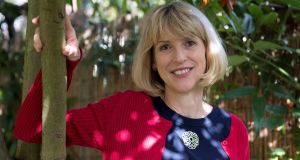 Anne Patterson lives in London and works for the NHS, doing most of her writing between shifts.

As the UK’s National Health Service celebrates its 70th birthday, its primary purpose continues to be to heal the sick – but it has also become the inspiration for a seemingly endless flow of fly-on-the-wall documentaries and hospital dramas. Perhaps one of the reasons these are so popular is because we are able to view the fragility of human flesh and vicariously confront our own mortality from the safety of our armchairs. Anne Patterson, the author of Yes, lives in London and works for the NHS, doing most of her writing between nursing shifts. Her debut novel is shortlisted for the McKetterick Prize, an award given to an author over 40 for a first novel.

Set in the fictional town of Derryconnor, somewhere in Co Antrim where Patterson grew up, it tells the story of Maureen McCormack who suffers a stroke at the age of 52. The opening descriptions of Maureen emerging into an increasing but confused consciousness are skilled and presented with a convincing sense of authenticity. As she is lifted by nurses and completely supported by them, she understands that this “sort of helplessness and letting go has to be relearned. It’s a bit like swimming: if you struggle above the water, it will make you more likely to sink. I have to think about floating. They are holding me like water.” She is initially paralysed on her left side and suffering from aphasia. These hospital scenes and the ministrations of the nurses are vividly convincing but, like much of the book, the seriousness of Maureen’s situation is often leavened with a lightness of humour that helps render her a character able to generate both our interest and sympathy.

However authentic the novel may be on medical issues and environments, Maureen’s stroke is not the central preoccupation of Yes, rather it is how moments of deep personal crisis inspire an intensity of self-reflection and the taking stock of our lives. As she physically stalls and turns into “someone else’s body that you’re watching in a mirror and trying to move by remote control”, her mind races into overdrive and the fragmented pieces of her life are slowly pieced together in a series of flashbacks. As she regains her speech, she chooses at first to keep it a secret, wanting to momentarily suspend her life in silence and offering those around her only the word “yes”.

This becomes the device on which the novel hinges because Maureen’s silence suddenly encourages her visitors to speak in ways that they previously would not. Her sick bed and her physical impairment become a kind of confessional where the secret thoughts of her family and friends can be revealed for the first time without the necessity of punishment or judgment. She also realises that in the past she has used speech “to stop rather than start communication”. The nagging question of whether this is entirely convincing is gradually stemmed by the quality of the writing and the rich complexity of the relationships that emerge at the heart of the book, particularly with her sister Shirley.

Maureen’s silence also allows her the space to speak truthfully to herself and reassess her life’s journey, one that came with a teenage pregnancy and a child given up for adoption; a passionless marriage to Walter that she revaluates in a more balanced way enabling her to share at least some of the blame. There is an affecting and sensitive but not sentimental portrayal of her relationship with her daughter Jackie who has Down syndrome and also the story of two love affairs, one with Jim who helps out on the family farm and a long-standing relationship with Tom Kelso, the local doctor.

Patterson writes dialogue well and is also adept at conveying character through well-chosen physical details or images, whether it is the hospital chaplain with his pious “looking-to-heaven eyes” or “Walter, whose kisses gradually faded and dried like a letter left in the sun”. The novel’s ending, where Maureen’s customary “yes” turns into a “no” might be slightly problematic for some readers, intentionally or otherwise, perhaps raising the question whether love is the ultimate cure or if it is just another placebo. But yes, Yes is a novel with much to enjoy and hopefully one with more to follow.