Yasmeen Ismail on how to draw out children’s emotions 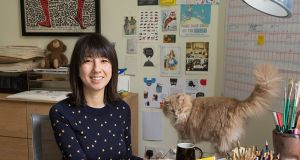 Parents of young children might already be aware of Dublin-born, Bristol-based illustrator Yasmeen Ismail, whose bold and bright picture books – including I’m A Girl! and Nothing! – both encourage and reflect the wild imagination and energy of children. Ismail is also the creator of the Draw & Discover series (Laurence King), a set of activity books for young readers and artists. The third instalment, Happy, Sad, Feeling Glad, has just been published, and unlike the other titles – which provide space to draw physical objects, like an “open” umbrella or what’s falling out of an “upside down” bag – each spread focuses on a particular emotion, from “surprised” to “cranky” to “lonely”.

Emotions are difficult and complex and have history and futures to them. It’s hard to pin them down in one image and explain them to a child

“Emotion has always been an important subject for me,” Ismail says. “It’s hard to go through life not understanding how you feel or why you are feeling it, for adults as well as kids. I think we can all relate.” Even though this book might have seemed a little more abstract than the first two, she found it an exciting, rather than daunting, project to work on. “Everything fell into place very easily, so not a difficult book to make at all. I think, having dealt with a lot in my life and having gone to therapy for nearly five years, I had already spent a lot of time examining emotions (just mine!) and figuring it all out. My own feelings are so much clearer to me and I am sure that that helped with this book.”

Were any of the emotions particularly tricky to think of images – or drawing prompts – for? “I think ‘Nervous’ was a bit tricky to illustrate. Being anxious is not something that lends itself to pictures so easily. There are a million things that I have anxieties about every day (I am 94 per cent anxiety according to an online personality quiz), and it’s hard to pinpoint what’s bothering me sometimes. Emotions are difficult and complex and have history and futures to them. It’s hard to pin them down in one image and explain them to a child.”

Despite dealing with some tough emotions – “afraid”, unhappy”, “guilty”, “miserable” and “frustrated” all make appearances – the final page invites the reader to draw something that makes them “happy”. It feels like a deliberate decision to end on a positive note, although Ismail admits she didn’t intend this as she put the book together. It wasn’t until a meeting with the editor and designer where “they pointed out that the book started with a Sad and Frightened and Miserable, and ended similarly” that some tweaks were made. “If it wasn’t for them,” she says, “there would be a lot of kids sitting around wondering where their black mood has come from.”

Editorial input has been important throughout creating the series. “Having never made an activity book before I thought it would be very easy,” she says. “I was busy and distracted, high on the excitement of my new career as an author / illustrator and I saw it as a quick job before I moved onto the next book. Every now and then this sort of thing happens, where I am an idiot and I think I can just whizz through something and I am always brought crashing down, back to earth. It’s never just a quick job. And I am glad it isn’t. I always come back to the realisation that I should have enough respect for my readers, publishers and myself not to do a half-ass job. There is no reason I know that means I should just tonk out a book.”

Her editor helped her “to see the light” and understand the possibilities of what can be done with an activity book. “After talking with her my book had structure, characters and a purpose. I made something I was very proud of.”

The great appeal of these activity books is that they encourage children to explore their own creativity, while also providing suggestions and structure that makes it easier for them to do so – the blank page is not always the best starting point. Ismail drew a lot as a child, with a particular fondness for rainbows: “I loved all the colours and wanted to include them.” She is not a fan of small “arbitrary” rules in school art classes such as not being allowed colour outside the lines or take more than one pencil, but she resists any suggestion that the educational system is responsible for smothering children’s creativity.

“Teachers are expected to not only teach, but to be all things including Mary Poppins and a disciplinarian,” she says. “They are expected to hit targets, teach, inspire and parent kids and also deal with troubled children, children with needs and parents, complaints and everything else in between. I think teachers do a wonderful job and I put it to you that it is not the schools who need to ‘do better’ for our kids, but the government who need to do better for our schools.”

It gave me great joy to work with kids, writing for them and meeting them. I know that when I was a kid there were things that I needed to hear. Things that would have helped

Her advice for parents – though she is wary, as a new parent, of telling anyone else what to do – wanting to encourage their children to be creative is not to micro-manage. “If a child colours a horse in blue, don’t tell them that horses aren’t blue. Let them get on with it. They need you to back off while they explore things. They need space to figure out their own aesthetics. You are the most wonderful parent, but they are not you. Colour your own picture. It might be more fun.”

Coming from the world of animation, Ismail’s passion for children’s books came as a surprise in some ways. Originally she had “a vague idea of being an editorial illustrator”, but when an agent noted her work was suited to children’s illustration, she realised it was the area for her. “It gave me great joy to work with kids, writing for them and meeting them. It turned out that there was a lot that I wanted to say and writing for kids gave me that platform. I know that when I was a kid there were things that I needed to hear. Things that would have helped.”

She still works on a variety of art projects, and relishes the opportunity to try out new things: “It keeps me on my toes. I don’t want to go stale.” Having just finished her maternity leave, she is artworking her second book for Simon and Schuster USA as well as writing books for Bloomsbury UK, Walker Books and Nosy Crow. Events and publicity will also keep her busy for the foreseeable future. Understandably, she notes the need to be able to “manage time well” as an artist when asked about the skills required to sustain a career, adding, “I am still working on this”.
The Draw & Discover series – Push, Pull, Empty, Full; Inside, Outside, Upside Down; and Happy, Sad, Feeling Glad – is published by Laurence King (£8.99 each). Claire Hennessy is a writer, editor and creative writing facilitator