One of the year’s best YA novels delves into the nuances of love, self-worth and letting go 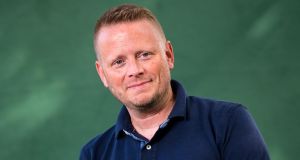 ‘Adam would have to get the flowers himself,” begins Patrick Ness’s latest novel, Release (Walker Books, £12.99), immediately highlighting its formal debt to Virginia Woolf’s Mrs Dalloway. The life of this almost-18-year-old, on the cusp of adulthood yet still under “the yoke” of his evangelical preacher father and powerless against a predatory employer, is revealed over the course of a day in Ness’s stylish prose.

And it is an eventful day, featuring confrontations with family members as well as the two boys he loves, or thinks he does. Ness’s portrayal of gay relationships zooms far past the typical coming-out story and instead delves into the nuances of love, self-worth and letting go – the “release” of the title.

Interspersed with the real is the magic, the tale of a mysterious creature rising from water and followed by an anxious faun throughout the day. Although beautifully written, its connection to the main plot seems more thematic than story-driven for much of the novel, and yet invites many questions that distract the reader from Adam’s journey. It is a slight frustration with what is still one of the finest YA novels to have emerged this year.

David Owen’s sophomore novel, The Fallen Children (Atom, £7.99), also draws on a classic text for inspiration – in this case, John Wyndham’s The Midwich Cuckoos. The concept – a number of mysterious, simultaneous pregnancies leading to the birth of eerie children with strange powers – is transplanted to an inner-city block of flats where expectations for young people are low and opportunities are scarce.

Sixteen-year-old Keisha, one of the narrators and violated girls, was supposed to be saving for university, her “way out”, but the sudden pregnancy changes everything, and turns her into the stereotype she has been striving to avoid. “It’s funny how, when you’re young, everyone expects you to mess up your life. They even work against you to make sure it happens. And then they gloat when they prove themselves right.”

Between an author’s foreword that discusses how difficult it is for today’s young people to succeed and the depiction of various challenges within the text – the difficulties of finding work, of staying in education, of accessing training opportunities, of overcoming oppressive parents – this is not shy about its intentions to sympathise with and empower young people, but the science-fiction angle ensures that it is also a gripping, engrossing read.

Virginia Macgregor (What Milo Saw) writes for teenagers for the first time in Wishbones (HarperCollins HQ, £7.99), a coming-of-age novel set in a tiny village where everyone knows everyone’s secrets – except, as 14-year-old Feather begins to realise, this doesn’t mean they are about to share them with the children. Her morbidly obese mother’s collapse on New Year’s Eve is the beginning of Feather’s quest to get her mum healthy and make her lose weight – but there is far more to her mum’s story than she realises.

The mysterious new boy in town, Clay – on whom Feather rapidly develops a crush, even as he seems to prefer her best friend – offers up a fractured reflection of her mum’s issues, suffering from anorexia. The portrayal of both disorders is sensitively handled, even though the idea that “love” is a cure-all for mental illness may furrow a few brows. Feather’s journey from ignorance to knowledge and understanding is rounded out by a vivid cast of characters.

Although eating disorders have long featured in young-adult fiction, the depiction often follows the “problem novel” format. It reflects on the maturation of the field that May sees not just Macgregor’s nuanced take on the issue but also Karen Gregory’s moving and thought-provoking Countless (Bloomsbury, £7.99), in which 17-year-old Hedda faces both the eating disorder that has led to her living away from her parents and the unplanned pregnancy that follows a one-night stand.

Obsessed with numbers – calorie counts especially – Hedda applies this tactic to ensuring that she will be healthy enough for her daughter, yet finds herself overwhelmed after the birth. “What if this is all a huge mistake? What if I can’t look after her? It’s all too scary, so I weigh myself again and feel a flare of triumph at the number.”

Even a potential new love interest cannot be Hedda’s knight in shining armour forever, and the struggles of trying to be independent in an often harsh world are all too authentic.

For fans of slick and compelling psychological teen suspense, Cat Clarke will be a familiar name; her latest, Girlhood (Quercus, £7.99), is set in a boarding school where “midnight feasts aren’t so much ‘lashings of ginger beer’ as ‘whatever booze we can smuggle in’”.

Harper is new to this world – her family won the lottery the day after her twin sister’s death – and perfectly placed to observe the privileges the others take for granted. She is nevertheless grateful to the world which has given her new sisters of a sort – her friends alleviate or at least distract from the gnawing guilt and grief. But these relationships are threatened by the arrival of new girl Kirsty, who seems to be a perfect echo of Harper, right down to a shared loss. What begins as friendship veers towards both romance and obsession, and Harper’s life cracks in ways she never imagined.

The conversational teen voice and mindset (evident in both Harper’s narration and the often-bizarre discussions among the girls) make this both authentic and all the more chilling – this is a book where the evil that women do will have a human rather than supernatural explanation.

Gillian Flynn posited marriage as the ultimate setting for dark thrillers; Clarke shows us that an all-girls’ school can be just as, if not more, chilling.