Worthy and wonderful: The best children’s and YA fiction of 2016

No need to force ‘worthy’ books on young readers this year. Some of the best books of 2016 are not preachy, but all are carefully crafted and engaging works of literature 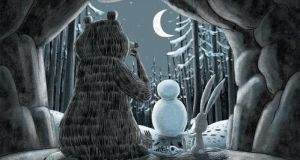 There is a terrible tendency for grown-ups to bestow only “worthy” books upon the young people in their lives at Christmastime, using a similar kind of logic to the insistence on finishing off one’s sprouts before opening a Selection Box. Adults, I implore you: let them have the treats this Yuletide.

Reading improves literacy and empathy and teaches us so much, but, just as with adult fiction, children’s and young adult fiction works best when the themes are woven into captivating stories, rather than loudly preached. Many of the titles here are “worthy”, addressing important themes – tolerance, compassion, difference, grief – but more importantly, they are carefully crafted and engaging works of art and literature.

For the very youngest readers (1-3), Animals by Ingela P Arrhenius (Walker Studio, £15) is a stunning picture book, larger than most and simply but vibrantly portraying different animals on each page. Jean Julien’s This Is Not a Book (Phaidon, £6.95) is another quirky title for this age range, with fold-out pages to play with.

Barroux’s Welcome! (Egmont, £6.99) similarly sneaks in an important message about compassion in a tale of polar bears trying to find a new home. And Diane and Christyan Fox’s A Dog Called Bear (Faber & Faber, £12.99), in which Lucy finds it very stressful dealing with Bear – who may not be quite the pet dog she was looking for – is both funny and heartwarming.

This is an age category where elements more favourable to older readers can sometimes sneak in. Jon Klassen’s We Found A Hat (Walker, £12.99), the third in his “hat” trilogy, offers up a tense situation where a turtle must choose between wanting something very badly and betraying a friend. Jory John and Lane Smith’s Penguin Problems (Walker, £11.99) features a hyper-self-conscious penguin whose repeated use of “literally” and a sarcastic “oh great” may well appeal to young adults more so than junior infants, but is fiendishly cute all the same. And Sam Winston and Oliver Jeffers’s stunning A Child of Books (Walker, £12.99) is a complex intertextual work of art – featuring the text of classics woven into the illustrations – which succeeds both as a picture book and as something to be fawned over by older readers.

Character-led series are particularly appealing for this age group. Julian Gough and Jim Field’s Rabbit’s Bad Habits (Hodder, £5.99) is the first in the Rabbit & Bear series, detailing an unlikely friendship with a healthy dose of quirky humour. For more reluctant readers, the practical workbook nature of Chris and Andrew Judge’s Create Your Own Spy Mission (Scholastic, £5.99) offers a more interactive experience.

In terms of beautiful gift editions for young readers, Faber & Faber have just released Ted Hughes’s “lost classic”, The Tigerboy (£6.99), with illustrations from Joe McClaren, while Beatrix Potter’s recently-discovered The Tale of Kitty-In-Boots is brought to life with artwork from Quentin Blake (Warne, £12.99). And readers of all ages will love Fatti and John Burke’s Historopedia (Gill Books, €24.99), a stunning visual journey through Irish history from the Stone Age to the marriage equality referendum.

Readers aged 9+ have adored Jeff Kinney’s Diary of a Wimpy Kid series for close to a decade now. The latest – and 11th – instalment is Double Down (Puffin. £12.99), combining text and comic strip to provide an insightful and tongue-in-cheek take on modern childhood and education. Irish-language lovers will be pleased to hear that the first volume is now available as Gaeilge, translated by Máirín Ní Mhárta – Dialann Dúradáin is published by Futa Fata (€9.95).

Readers looking for something more “grown-up” than Walliams (as though ridiculousness is something any of us should grow out of) might want to delve into Ross Welford’s Time Travelling With A Hamster (HarperCollins, £5.99), in which Al travels back to the 1980s to save his father’s life. Time travel might be a mini-trend this year: Judi Curtin’s heroines similarly venture back to a pre-smartphone era in Time After Time (O’Brien, €9.99).

For a sensitive look at what it means to see the world differently from everyone else, try Ann M Martin’s How To Look For A Lost Dog (Usborne, £6.99) – also one for animal-lovers. Mechanical animals propel the plot in Peter Bunzl’s Cogheart (Usborne, £6.99), a steampunk adventure with a determined heroine and compelling twists. And engaging with animals in a completely different way is Ali Benjamin’s moving and authentic The Thing About Jellyfish (Macmillan, £6.99), which sees its young protagonist turn to science in the hope of explaining the sudden death of her best friend.

The Ministry of S.U.I.T.S.Knights of the Borrowed Dark

Francesca Simon of Horrid Henry fame steps into teenage fiction with The Monstrous Child (Faber & Faber/Profile Books, £9.99), combining an authentic adolescent voice with Norse mythology. Just as dark but – painfully – closer to reality is Zana Fraillon’s The Bone Sparrow (Orion, £12.99), narrated by a refugee who has never known life outside a detention centre. Also inviting empathy for those less fortunate than most of its readers is ER Murray’s Caramel Hearts (Alma Books, £7.99), in which a teenage girl copes with a fractured home life, an alcoholic mother, and teetering on the edge of poverty.

For junior feminists, the must-read titles are Anna Carey’s The Making of Mollie (O’Brien Press, €8.99), which focuses on the suffragette movement in Dublin in 1912, and Holly Bourne’s modern-day Spinster Club series, recently completed with . . . And a Happy New Year? (Usborne, £9.99). Both authors have successfully managed to balance the political and personal, with convincing and relatable characters at the heart of these ultimately empowering stories.

The Bombs That Brought Us TogetherNeedleworkThe Sun Is Also A StarEverything, Everything

This has also been a year where transgender voices have been heard, rather than simply written about, for teens: Arin Andrews’s Some Assembly Required (Simon & Schuster, £7.99) is an honest and moving memoir, while Meredith Russo’s If I Was Your Girl (Usborne, £7.99) combines a traditional love story with the struggles of being completely honest with new friends.

Finally, say hello to dystopian Ireland. Peadar Ó Guilín’s gripping The Call (David Fickling Books, £10.99) draws on folklore to help shape a futuristic world where teenagers are hunted down by the Sidhe, while Sarah Maria Griffin’s Spare and Found Parts (Greenwillow Books, $17.99) presents a post-apocalyptic Dublin as the backdrop for a lyrical Frankenstein retelling. Both are smart and engaging reads that prove that dystopian fiction can and should extend beyond the love-triangle/chosen-one cliche.

Claire Hennessy is the author of Nothing Tastes As Good (Hot Key Books).