Word for Word: it pays to pay attention to our poets 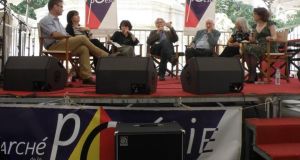 For the past 30 years an extraordinary event has been taking place each June in Place St Sulpice in Paris. For the Marché de la Poésie the beautiful square is filled with stands manned by poetry publishers. There are 622 booths, each representing its own French publishing house. I marvel at their ability to survive and to attract 50,000 people to visit the stands.

Because Ireland was this year’s guest of honour, a flying army of 15 Irish poets, led by Seamus Heaney, descended on Paris to take part in the event. Two new anthologies of work by Irish poets, translated into French, have been published. One of them, Femmes d’Irlande, a project of the Irish Cultural Centre in Paris to mark the Irish EU presidency, is an anthology of new translations of work by women poets in both Irish and English, reflecting the changes in Irish women’s lives since we joined the EU. It was supported by Culture Ireland and Ireland Literature Exchange.

All over the world, Irish poets read at festivals, teach in universities and are published in translation. Germany, Italy, India and China are among the places where contemporary poetry from Ireland will be heard in the coming months. Jacques Darras, the president of the Marché, spoke of the way poets all over the world know and understand each other.

Listening to him, I imagined a kind of spider’s web of poets around the globe, a superstructure in which truth and beauty are the currency and borders don’t exist.

You could say the same about all our artists. They are our spiritual international ambassadors. They don’t have to deal with the nitty-gritty of politics, as our diplomats do, and they do not – nor should they – dance to the tunes of particular governments.

Indeed, the likelihood is that, like some of their illustrious predecessors, they will be critical of much that happens in their native land. That is their calling, and they often see the truth before the rest of us do. They have no overtly political agenda, they are not trying to do business deals, but they create goodwill and curiosity about Ireland in a way that threatens nobody and invites others to share our experience.

If we are to deserve our reputation as a nation that values poetry, then we need to listen to the poetic voice, whether it’s by attending readings, buying new collections or supporting festivals and other literary events.

There are several such events over the coming months, from West Cork Literary Festival, in early July, to the DLR Mountains to Sea Festival, in September, where the winners of the Strong/Shine Award and the Irish Times Poetry Now Award will be presented. Poetry is all around us. It would do us good to pay it more attention.

Doireann Ní Bhriain is a broadcaster, producer and voice-presentation trainer.