Why I love ... Humanity: A Moral History of the Twentieth Century, by Jonathan Glover

Joe Humphreys on a necessary remembering, a demonstration for all those crying ‘revolution’ that violence once unleashed is uncontrollable. What’s your favourite book? Send us your review of a title you love to books@irishtimes.com and each week, we will publish one 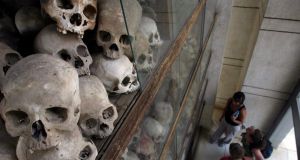 Tourists visit a memorial stupa filled with the skulls of more than 8,000 Khmer Rouge victims at the Choeung Ek site of the “Killing Fields” located on the outskirts of Phnom Penh, Cambodia. Photograph: Chor Sokunthea / Reuters

Book Title:
Humanity: A Moral History of the Twentieth Century

A great book must have a big theme. It must be ambitious, and push the boundaries of conventional style. It must leave an impression, or create an impulse for change. Glover’s Humanity ticks all those boxes.

Crisscrossing history, psychology, philosophy and economics, he tries to answer that most pressing of questions: what drives one person to dehumanise another?

First published 15 years ago as Europe was emerging from the bloody Yugoslav conflict, Humanity draws the reader into a century of horror: lest we forget – the Nazi Holocaust; Stalin’s pogroms; China; Cambodia; Rwanda. This is a necessary remembering, a demonstration for all those crying “revolution” and thrusting ideology to the fore that violence once unleashed is uncontrollable.

War, in this analysis, is a trap. Protagonists bind themselves up in tribalism, procedure or pride. Glover’s account of the European psychosis which led to the first World War – basically a mixture of arrogance and stupidity – is not only illuminating from an historical viewpoint but highly instructive for today. He quotes RG Collingwood’s description of the Great War as “un unprecedented disgrace to the human intellect”, and there’s nothing to suggest human beings have become any more intelligent since.

Humanity is, however, a hopeful book. To guard against our worst natures, Glover identifies common causes of inhumanity: among them, normalising cruelty, maximising conformity and the shift to killing at a distance – now more achievable through modern technology. And he pinpoints the circumstances which allow for “a sense of shared humanity to break through”.

A memorable example comes from George Orwell’s account of the Spanish civil war. Orwell later described how a Fascist soldier came within sight, half-dressed and running, holding up his trousers with both hands: “I refrained from shooting at him … I did not shoot partly because of that detail about the trousers. I had come here to shoot at ‘fascists’; but a man who is holding up his trousers isn’t a ‘fascist’, he is visibly a fellow creature, similar to yourself, and you don’t feel like shooting him.”

Joe Humphreys is Education Correspondent with The Irish Times, and author of the weekly Unthinkable philosophy column. He previously worked as a correspondent in South Africa and as an assistant news editor, and has published books on the history of Irish missionaries, the politics of sport and the ethics of world religions. Twitter: @JoeHumphreys42