When the past is present: the multiple meanings of ‘hearing voices’ 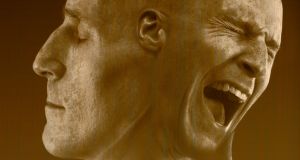 A voice telling the hearer to kill themselves could be understood as a very badly communicated suggestion that one needs to make significant changes in one’s life, or as a call for acknowledgement of pain. Photograph: Gettty Images

What does it mean when someone is “hearing voices”? It has been seen as a sign of the divine and a symptom of illness. For much of the 20th century it was tightly tethered to schizophrenia. Yet a new perspective has emerged. This has proposed alternative meanings and causes for voice-hearing, and is developing innovative ways to help hearers. This approach has been driven by people who hear voices themselves.

Today, within psychiatry, distressing voice-hearing is predominantly seen through a biomedical lens. It has been deemed “a symptom of brain disease just like blindness”. This is nothing new. If we asked the Ancient Greeks about hallucinations, their reply would not be all Greek to us. They would say voice-hearing is caused by a chemical imbalance that should in turn be treated by other chemicals, albeit ones with unpleasant side-effects. Two thousand years later, only the names of the chemicals have changed.

The problem with a biomedical approach is not that there aren’t brain changes associated with voice-hearing. There are. Much research, including my own, has found evidence of this. Neither is the problem that this approach can’t help people. It can. Antipsychotics can be of great help and can save lives.

The first problem with this account is its tendency to not look beyond biology. It assumes it is unproblematic that only 0.3 per cent of schizophrenia research has investigated the role that child abuse may play in its development. It also attempts to sneak by us the assumption that biological changes demand biological solutions. It assumes new medications are needed, rather than new meanings.

A further problem is it equates the elimination of voices with recovery. This assumes voices don’t have important messages for the hearer. Furthermore, if the drugs don’t work, and for many people they don’t, it may be assumed little else can be done (although one should never simply stop taking antipsychotics; coming off these without medical advice can be dangerous).

Finally, it shuts the door to the expertise of voice-hearers by assuming the activity of their brains and genes can tell us vastly more than their act of telling their story. All these assumptions have been questioned by the Hearing Voices Movement (HVM), an organisation led by voice-hearers and supported by academics, mental health professionals, family members, and others. Although there are indeed valuable things that people cannot tell us and that only magnets and centrifuges can reveal, it has emerged that without the context of a person’s life, centrifuges may only spin lies and magnets repel, not attract, truth.

Many voice-hearers have found that the hands of the past are clearly working their voices. This past has often been traumatic

An exorcist once rhetorically asked me what else could explain vile and vitriolic voices, if not the devil. We do not have to look far for an answer. “It was clumsily done,” wrote Samuel Beckett in The Unnamable, “you could see the ventriloquist.” Similarly, many voice-hearers in the HVM have found that the hands of the past are clearly working their voices. This past has often been traumatic.

Given that traumatic life-events cause brain changes, one could suggest voice-hearing is a sign of a brain disease caused by trauma, and promptly return to biomedical remedies. Instead, the HVM has suggested that voices may profitably be listened to and decoded, rather than just suppressed. To do this it has developed tools such as the Maastricht Interview. Through this, voices can come to be recognised as misunderstood messengers. A voice telling the hearer to kill themselves could be understood as a very badly communicated suggestion that one needs to make significant changes in one’s life, or as a call for acknowledgement of pain.

Eleanor Longden describes how she compassionately spoke to one of her voices, saying “You represent awful things that have happened to me, and have carried all the memories and emotion because I couldn’t bear to acknowledge them myself. All I’ve done in return is criticize and attack you. It must have been really hard to be so vilified and misunderstood.” After a long pause, one of the voices responded: “Yes. Thank you.” If this approach could make apparently nasty voices nicer this would be a major breakthrough, as the strongest predictor as to whether a voice-hearing person will enter psychiatric services is if they hear nasty voices. Formal trials of the Maastricht Interview are now underway.

There is no one reason people hear voices, and there is no one answer. There is, however, only one place to start, and that is with listening

Hamlet knew there was something rotten in Denmark, because a phantom appeared and told him so. Many phantom voices are telling us the same thing. We should already be aware of the extent of the problem of child abuse in society. However, there is a need for greater awareness of the potential mental (and physical) health consequences of such abuse. It was once said that rape is a problem with no name. This is wrong. It is a problem with many names, but these exist in a psychiatric hall of mirrors, most of which never actually name it. We need to acknowledge that diverse disorders, including schizophrenia, bipolar disorder, borderline personality disorder, depression, anxiety, and anorexia may all, in some cases at least, have their roots in experiences of child abuse. We have become better at identifying child abuse, we now need to be better at recognising its potential effects, including voice-hearing.

Of course, not everyone who hears voices does so due to child abuse. There are many routes to voice-hearing, and also many ways to cope with it. Some people simply want their voices stopped. New ways to do this are needed. I have just received funding from the US-based Brain & Behavior Research Foundation to trial neurofeedback for voice-hearing, in collaboration with Dr Michael Keane’s Dublin-based Actualise neurofeedback clinic. This will test if training voice-hearers to control the activity of their brain can quieten or eliminate their voices. Yet other people will want to dive deeper into their voices to try and learn from them. HVM-based Maastricht Approach Centres have been opened in the UK to facilitate this, and training in this approach is being delivered across Ireland.

There is no one reason people hear voices, and there is no one answer. There is, however, only one place to start, and that is with listening.
Dr. Simon McCarthy-Jones is an Associate Professor in the Department of Psychiatry at Trinity College Dublin, Ireland. Can You Hear Them is published by Jessica Kingsley Publishers, £13.99