A memoir by a young neurosurgeon faced with a terminal cancer diagnosis who attempts to answer the question, what makes a life worth living? Video: Random House 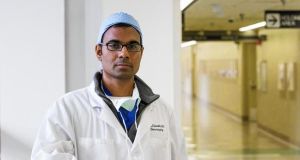 Paul Kalanithi: eloquently articulates the psychological complexity of what it is to be a cancer patient in the 21st century

John Updike said that every writer is simply unpacking their own bag, describing writing as a way to come to terms with one’s current and historical life experience. If that is the case Paul Kalanithi, in When Breath Becomes Air, is unpacking a very large bag indeed, and not just his own.

When Breath Becomes Air is an extraordinary book about something terribly ordinary: how to live and how to die. This book has many important things to tell us, as individuals and as a society. For anyone interested in living, this book is mandatory reading. Kalanithi is a young, talented neurosurgeon who is destined for great things. He takes the reader on an extraordinarily sensitive, breathtaking, at times heartbreaking and utterly compelling journey through a young man’s struggle with terminal illness. But Kalanithi is not writing about a patient he has treated, he is writing about himself.

Aged 36, and approaching the pinnacle of his career, Kalanithi was diagnosed with terminal cancer. When Breath Becomes Air is his unique, poignant account of living with the knowledge that one’s death is imminent. It is told with the sensitivity and fluency of a poet, at times with the stark honesty of a confessional poet, the likes of which Sylvia Plath and Robert Lowell would be very proud.

This book, however, is about much more than illness and death. This is a book about life and how to live a good life, or at least a good-enough life. Like many before him, Kalanithi struggles to answer, and at times even live with, the profoundly important question: how does one live a meaningful life?

The question of meaning tends to takes centre stage when serious illness befalls the individual. With serious illness, the veil of certainty and the illusion of permanency we normally protect ourselves with is abruptly removed. In his struggle to find or create any coherent meaning, Kalanithi takes the reader into the heart of life and death. At times this is a place of brutal isolation and at times a place of the most heartbreaking human intimacy imaginable.

When Breath Becomes Air is an unpolished, frayed and terribly human story about coming to terms with a future that is now not going to happen. It is told with an urgency propelled by its author’s enforced confrontation with his own mortality at the age of 36. The urgency is not just about the author’s age however. There is generosity, compassion and passion in the author’s voice that conveys a desire to share with the reader his painfully gained insights about the one predicament we will all face: mortality. He delves into this age-old dilemma of humankind with a remarkable emotional intelligence and bravery.

This is not easy reading. It will unsettle. Kalanithi doesn’t sanitise, sentimentalise or romanticise the brutality of cancer and the agony of death. This is a highly personal narrative and at the same time profoundly universal. The author compassionately and humanely grapples with the complexity and contradiction inherent in the human condition. He does this by being intimately connected with his individual, existential challenge and simultaneously connected to the universal existential challenge that mortality presents. It is his capacity to transcend the individual and compassionately articulate the universal that creates the powerful tenderness that makes this book brilliant and bearable.

Kalanithi eloquently articulates the psychological complexity of what it is to be a cancer patient in the 21st century. The tremendous advances in cancer treatment and the associated increased survival rates witnessed in recent decades are not without their challenges. He bravely articulates the profound, and at times very confusing, paradox that many cancer patients feel: the gratitude for being alive due to these advances and simultaneously resentment for the often very significantly compromised life of a cancer “survivor”.

Kalanithi describes the landscape of being a survivor with a poignancy and accuracy that is striking. It echoes what one patient described to me recently that he was on the “right side of science” and lucky to be alive but often felt like he was living in some kind of limbo, a kind of emotional no-mans’ land.

Kalanithi speaks about the phenomenon of “survivorship” – a questionable term used to describe people living with cancer. It is estimated that there are approximately 40,000 such survivors in Ireland. The psychological experience of these survivors is poorly understood and Kalanithi’s contribution on the subject is timely and welcome.

At times the boyish unquestioning enthusiasm for the adrenalin of the hospital emergency department or the 100-hour weeks is challenging. Failing to address these and almost any of the other systemic problems of medicine, such as the inherent inequality of a privatised healthcare, is unfortunate but understandable. Time was not on Kalanithi’s side.

This boyish enthusiasm is isolated and in some ways serves as the perfect foil for the maturity of a man so young. Outside of this brief and forgivable brush with macho enthusiasm, we interact with a deeply authentic man as he grieves intimately with the reader a loss for the future he will not have. His emotional intelligence is breathtaking at times. His humanism and authenticity embraces the reader in a way that is both deeply tender and remarkably strong.

This book is also about language, the inadequacies of language to chisel out some meaning from the absurdity of the human condition. Kalanithi immerses himself in literature in order to find a vocabulary to make sense of death. He refers to literature bringing him back to life in the face of the monolithic uncertainty that illness brings. He writes: “I need words to go forward”. It is eventually Samuel Beckett’s seven-word antiphon that provides what he needs: “I can’t go on. I’ll go on”.

One cannot but help think what Kalanithi’s life might have been had he not died at 37. The tendency to think of him alongside fellow doctor, neurologist and writer Oliver Sacks, is hard to avoid. However, Kalanithi’s very distinct voice, embedded with wisdom, bravery and eloquence sets him apart. In When Breath Becomes Air he has bravely unpacked his own bag and in so going has made a very significant contribution to helping us learn how to live and die.

Paul D’Alton is head of the Department of Psycho-oncology at St Vincent’s University Hospital, Dublin