What will happen to all tomorrow’s parties?

Political parties have been set adrift from their constituencies, a tantalising study argues, ceding ground to ideologically vague and organisationally hopeless movements 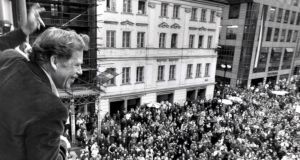 Presidential candidate Vaclav Havel waves to his supporters from a balcony in Prague in 1989. Photograph: Petar Kujundzic / Reuters

Shortly after assuming the presidency of Czechoslovakia, in December 1989, Vaclav Havel, the moral leader of the dissident movement under communism, elaborated on a favourite theme, the concept of a democracy of “unpolitical politics”.

He expressed his scepticism about a democracy based on political parties, arguing instead that new forms of representation had to be developed in order to avoid the exclusion of a majority of citizens. Havel’s aversion to the concept of politics was, of course, informed by the only mass organisation he really knew: the Communist Party.

While he was busy dealing with the new celebrity lifestyle that the presidency of the republic brought with it, his chief opponent and later his nemesis, Vaclav Klaus, was running around the Czech lands building up his own well-oiled political party. Klaus later fashioned this into a knife that, Brutus-like, he thrust into Caesar’s heart.

Had I not been personally acquainted with the Croatian and Serbian presidents, Franjo Tudjman and Slobodan Milosevic, I could state unequivocally that Klaus was the least sympathetic politician I ever met. Yet in this one thing I must give him his due: we dispense with vibrant and dynamic political parties as the key mechanism of representative democracy at our peril.

Havel’s thesis of a democracy of personalities and social movements was naive at best, dangerous at worst. Yet according to the late Irish political scientist Prof Peter Mair, that is where we have been heading for 20 years. Political parties have been set adrift from their original constituencies, weakening their ability to represent the people who vote for them. Instead, they are peopled with men and women who on leaving university enter the profession (for that is what it now is) to demonstrate their managerial proficiency and not their commitment to a set of values.

Ideological juices
It was not long before Klaus’s political party started to mimic the behaviour of western European political parties as their ideological juices began to drain away in the 1990s. These would be substituted by a reliance on the state and a set of skills required to manage the complex corporate networks of postindustrial society. Passion and commitment to a vision of society based on equality, competition, social justice, or any values for that matter, did not fit into this.

Yet in a strange way Havel’s concerns anticipated what, according to Mair, is the hollowing out of (European) democratic politics, whereby political parties have been set adrift from their original constituencies, weakening their ability to represent the people who vote for them.

Not surprisingly, Mair often returns to the United Kingdom and the political trajectory of Tony Blair and Gordon Brown to prove this point. He quotes Blair’s close colleague Lord Falconer saying that New Labour sought the depoliticisation of key decision-making as “a vital element in bringing power closer to the people”. Mair notes that on one level this was mere populist claptrap, but it also reflected the growing belief that “the relevance of government declines while that of non-governmental institutions and practices increases”.

This is actually not very far away from Havel’s idea articulated almost a decade earlier. The problem is that if we accept Mair’s basic thesis then we are now part of a system that isn’t working: the fragmentation of the democratic process has led to both the electorate and those they elect withdrawing, as Mair puts it, from political engagement.

This has manifested itself in a variety of ways. From the 1990s onwards there was a steady decline in voter turnout across the European Union. Mair cites this as evidence of the impact of indifference as a powerful yet underestimated force in democratic politics.

Then there is the often-observed collapse of ideological passion among parties, turning the process of coalition-building into a bidding war that has little to do with history. “In Ireland,” he points out, “the traditional bipolar pattern of competition was irrevocably broken in 1993 when Labour, long the parliamentary ally of Fine Gael, crossed the traditional ‘civil war’ divide to form a government with Fianna Fáil.”

The ease with which the Lib Dems hitched their wagon to the Tory cavalcade is now the norm encapsulated during the laughable party-leader debate in advance of the UK general election of 2010, when Gordon Brown and David Cameron repeatedly followed Nick Clegg’s answers with the phrase, “Well, I agree with Nick.”

At the book’s heart, though, lies the withering away of political parties as mass organisations. The party rank and file has been getting ever smaller and, partly in consequence, has become detached from policy. Once they have reached the top, party leaders are now in a position to reimagine and restructure policies with complete disregard for anything coming from the base or indeed that appeared in their manifestos.

In 2000 Britain’s then chancellor of the exchequer, Gordon Brown, who in my opinion was mistakenly regarded as representing old Labour within the new, rejected a trade-union demand to restore the link between pensions and average earnings, a proposal that had won a large majority at the Labour conference. Mair quotes Brown as responding, “I’m not going to give in to the proposal that came from the union leaders today . . . It is for the whole community, and I’m listening to the whole community.”

Or, in other words, just make up what you’d like the whole community to be thinking and then stick it to your party.

In the absence of ideologically firm political parties to counter the influence of unbridled financial markets, opposition to casino economics has splintered into various pressure groups, ideologically vague and organisationally hopeless movements like Occupy, and fuzzy internet operations like Anonymous. Their impact can be immense – Wikileaks and Edward Snowden are the best examples – but their political programmes often melt at first touch.

Unfortunately for us, Mair is unable to give us any answers to the disturbing questions he has posed. Three chapters in to what was likely to be a much longer work, he died of a heart attack while on holiday in Connemara in 2011. So overall this is a frustrating book to read, not because it isn’t stimulating (although I must warn that it is by an academic and written for an academic or politically engaged audience) but because the work was only just getting into its stride when he died.

Originally commissioned on the back of a piece Prof Mair wrote for the New Left Review in 2007, the book was fashioned from those draft chapters and other essays that were knocked into coherent shape by Mair’s old friend from UCD Francis Mulhearn. But it is still only 160 pages. The second half is tantalisingly interesting, looking at the implications of the crisis of representative democracy in Europe’s nation states for the European Union’s political structures and institutions.

The EU, Mair would argue, is the apotheosis of the managerial style that has come to define modern European politics, where elites can collectively agree on a way forward for the European Union and then claim to their own electorates that the damn EU tied their hands when it came to fighting for national interests.

Enter the opposition, made up of a motley crew of anti-European, anti-tax, anti-immigrant forces who nonetheless fulfil a genuine political function that the hollowing out of western democracy has, intentionally or otherwise, long forgotten about. This is not an optimistic work.