What if drinking was a professional sport?

Jason Johnson, author of ‘Sinker’, on the ‘alco-sumo warrior’ who inspired him to drink, and now to write 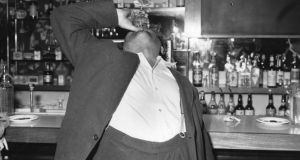 Brendan Behan: The Irish aren’t alone in making a lot of space in our lives for alcohol, but we’re ahead of the pack in embracing it. Men like George Best, Behan, Alex Higgins and Richard Harris make many of us feel proud largely because of their hellraising, not in spite of it. Photograph: Hulton Getty

There was a massive man with a massive reputation in Enniskillen. The story was that, in a single session, he could routinely knock back 20 pints and more. He would quietly sit there, hour after hour, and tip the beer into him as the rest of the punters came and went. He’s long dead now, and probably not from too much jogging. But here’s the thing: as teenagers, we thought he was a hero.

You’d see him lumbering up the street at lunchtime, heading for the pub, and hear the admiration.

“Aye, nobody’s fit to take him in a session.”

He was a sort of alco-sumo warrior, a man with some kind of vague superpower. What the hell were we thinking? Where did we get that demented awe for this obese alcoholic who must have blown every penny he had – and then some – washing himself away?

By any of those standard touchstones of what has real value in the end – your health, your time, your family – this man spent his days pissing copiously over them all. But for us lads, on the cusp of our drinking careers, he was a man of undoubted achievements, a man with a very particular set of skills. He was a winner.

And, from what we knew of the world, we weren’t wrong to think it. Like all winners, he was always the last man standing. He was a front and centre player in a culture that respects a fella who can handle a drink, that mocks a fella who cannot.

The Irish aren’t alone in making a lot of space in our lives for alcohol, but we’re ahead of the pack in embracing it. Men like George Best, Brendan Behan, Alex Higgins and Richard Harris make many of us feel proud largely because of their hellraising, not in spite of it. Their stories are the stories of the bold who did it their way, of mavericks who would not be told.

Their adventures somehow tap into the same thing that makes almost all adults chuckle when we talk about booze, when we tell someone we had a few too many at the weekend and the oul head’s not the best.

Where does that come from? The love of the craic? Some notion of the wounded Irish soul? The rain? Too much religion? The history? The Troubles? Who knows?

And anyway, pound for pound, do we really do the whole drink culture thing more than the Scots, the Germans, the Norwegians? Or, like the French and sex, or the English and class, do we just talk about it more? Who knows?

When I was 16, the frequent binge was a rite of passage to adulthood. Aged 17, I was happily knocking back pints at a steady rate of knots, never ejecting it, rarely falling over. I knew I was good at this thing.

Aged 22, spending a year at college in America, I was once approached by a well-meaning Christian who suggested my drinking was out-of-control. That made me laugh. I told her she didn’t understand, that her definition of heavy drinking was different than mine. I told her sincerely it was part of my culture to get absolutely langered several times a week. No one can say I haven’t done my bit for stereotyping.

When I finally, finally, got round to confronting my drinking, I got round to thinking about just how solid the booze culture is in Irish society. That got me thinking how it would only have taken a slight twist of history for this beloved habit to become an actual sport – a proper professional sport.

And I thought how if drinking was a professional sport, the Irish would take it seriously. We’d be all over it. There would a reputation to protect.

Imagine, for a moment, there were big, glittering, showpiece events where hard-bitten, world-class boozers gathered like boxers to slug it out glass for glass. Imagine watching as they knocked back the jars, as they verbally attacked each other, as they tried to stay upright and within all the rules for as long as they could.

It would be terrible, horrible, intense, incredible. Would you watch? I would. I bet many would. If we really do love anti-heroes, then these guys would be just the ticket in our politically correct world.

As a writer, this all seemed like magnificent territory to plunder, a place to find colour, character, conflict, confusion, humour and some upside-down heroics. And I had plenty of experience to draw on. So I wrote a book called Sinker about a man from Derry trying to break into this crazy game, the world’s most hated and controversial sport.

If I’m honest, I’d like to say Sinker says something wise or sobering about the wild Irish drinking culture which inspired it. But it doesn’t. There’s no judgements in the story. I’ve no business doing such a thing.

It’s a bit of a thriller, drawing initially on the craic, the undoubted joy to be found in heavy drinking, the very reason most of us started doing it in the first place. The characters need to get sponsorship, to win fans, to stand up for their personal freedom, to try not to drop dead after 30 pints.

Their inner soul-searching, the heavy misery of men compelled to smudge up their minds again and again, I’ve left to themselves.

Writing this has helped me clarify the story of my own drinking. There have been times when I’ve had a good run at the 20-pint session. A lot of that was funny. A lot of it makes me want to crawl under the nearest bus when I think about it. But I feel lucky to have got through that part of my culture in which I most enthusiastically involved myself with, I think, my health intact.

I have no idea what readers will make of a story like Sinker. What I do know is that it has turned out to be the story I wanted to tell in the way I wanted to tell it, and I barely dared hope for that when I started. It just remains now for me to offer my thanks to a very large and long-dead man for some of the inspiration.

I’d buy him a pint if I could, but I’d leave him to it after that.

Sinker by Jason Johnson is published by Liberties Press on June 9th, priced €13.99 / £11.99. Johnson, 45, is a journalist and writer from Enniskillen. He has written two previous novels, Woundlicker (2005) and Alina (2006). He is married with two children, Sean and Jess, and lives in Belfast.