What happened when seven poets met to eat peacock in 1914? 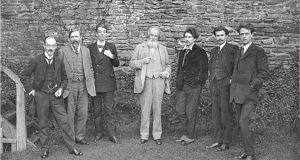 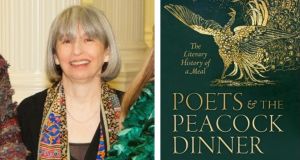 Lucy McDiarmid at the launch of her book Poets and the Peacock Dinner in Dublin in December. Photograph: Tony Kinlan

On January 18th 1914, seven poets gathered to eat a peacock. The meal was organised as a tribute to the handsome old man with the impressive white beard in the center of the photograph: Wilfrid Scawen Blunt, the West Sussex landowner, horse-breeder, philanderer and poet married to Lord Byron’s only granddaughter, Lady Anne Isabella King-Noel.

Blunt was also an Arabist and anti-imperialist, proud to have been the first Englishman who “suffered even the shortest imprisonment for Ireland’s sake”. He had spoken at a banned meeting in Galway in 1887, getting no farther than the words “Men of Galway!” Serving a prison sentence in Galway Gaol, he wrote a sonnet sequence praised by Wilde and Yeats.

The six visiting poets all lived in London; they rented a car from Harrods for £5 and drove from London to Newbuildings Place, Blunt’s manor house in West Sussex, arriving at 12.30pm. The visitors were WB Yeats and Ezra Pound, the celebrities of the occasion, two older poets (Victor Plarr, on the far left, and Thomas Sturge Moore ) and two young Imagist friends of Pound (Richard Aldington, next to Pound, and Frank Flint).

Blunt served them lunch, which was roast peacock and roast beef (the peacock was small); the poets gave him a marble box designed by the avant-garde sculptor Henri Gaudier-Brzeska. The box had a nude female carved on one side of it and was filled with the guests’ recent poems.

After dinner, the seven poets went outside for a photo opp; then they went back in and had tea, where they were joined by the writer Hilaire Belloc, who was Blunt’s neighbour; and at 5pm or 5.30pm, depending on whose account you read, they drove back to London.

This gathering came about because Ezra Pound, then living in another part of Sussex with Yeats, wanted to meet every poet in England. Yeats had met Blunt several times already through their mutual friend Lady Gregory, and she acted as intermediary for the dinner, making the plans with Blunt (and suggesting the entrée). The first letter about the peacock dinner is written not by Pound to Blunt but by Yeats to Gregory: she had the access.

Pound originally wanted to invite Blunt to Soho for dinner, because that’s where the avant-garde poets met, but Blunt said he was too old to go to London (he was only 73) and invited them to Sussex.

And that’s the short version of the dinner. I knew a little bit more than that in 2001 when I gave a lecture on it; after more research, the lecture turned into an essay; and then the essay turned into a book.

Of course there are other all-male dinners of cultural interest - the Symposium; the Romantic poets’ “Immortal Dinner”; and another peacock dinner, also in 1914, organised by the artist Louis Comfort Tiffany at his Long Island estate. But I was drawn to this one because it was odd.

Blunt was a colorful character, operatic really, with his 4,000 acres, his horses and women and Byronic aspirations. And the event had lots of paraphernalia associated with it - the marble box of poems, the peacock, and the peculiar photograph, with the poets seeming to stand both together and apart. And it was a curious fact that this all-male dinner (that was Pound’s directive) was organised behind the scenes by a woman.

I felt confident from the beginning that the dinner was significant. As I did research in the correspondence of Blunt, Lady Gregory, and Yeats at the New York Public Library, in Blunt’s diaries at the Fitzwilliam Museum in Cambridge, in the poets’ thank-you letters to Blunt in the West Sussex Public Records Office, and in many newspapers, memoirs, biographies, and obscure writings by all the poets, I developed ideas about what had happened. I also had lunch with Blunt’s great-grandson, Lord Lytton, and his wife, who live in the house where the peacock dinner was eaten. (The meal was lovely, but it wasn’t peacock.)

The peacock dinner was both a ritual of affiliation and a networking event: younger poets joined to honour an older one, and they made the event as visible as possible. Five accounts of it were published in journals and newspapers on both sides of the Atlantic.

What none of the accounts mentioned was the invisible presence of women, not invited but linking the men through romances and affairs. The three poets in the center of the photograph (Blunt, Yeats, and Pound) were bound together intimately by the women who introduced them, those they married, and those they loved.

Yeats married Dorothy’s cousin Georgie Hyde-Lees in 1917. The American poet H.D (Hilda Doolittle), who had been engaged to Pound, married Aldington only months before the dinner. Artistic, literary, well-connected women, they were important (in different ways) for the poets’ careers.

The intricate pattern of alliances that link these three poets shows the workings of a vocation in which marriage and adultery, as well as friendship, may constitute professional networking. And Blunt, of course, had married Byron’s granddaughter. The exchange of bodily fluids with Lady Anne constituted a symbolic cultural exchange with the great poet, a transmission for which the woman was the conduit.

The central men at the peacock dinner, then, embodied a series of homosocial friendships created by heterosexual intimacies. The lives of the two least significant poets support that model by counter-example: Victor Plarr and Frank Flint, the men on the left and right edges of the photo, and the only two peacock poets of whom no biography has yet been written, were faithful husbands who had not married for professional advancement. Flint (who was from a working-class family) had married his landlady’s daughter, and Plarr had married a woman in domestic service in London.

And so my book, Poets and the Peacock Dinner, does not see literary history - as it is usually seen - in terms of isms (such as modernism) but in terms of intimacies. It looks at the transmission of the professional culture of poetry on a small scale, as a history that is inseparable from romance and friendship.

In the introduction I imagine a peahen dinner that might have taken place with all the women poets at the time - H.D., Marianne Moore, Katharine Tynan, Amy Lowell, Sylvia Townsend Warner, among others - but it didn’t happen because the women’s networks were not yet developed enough to provide the means, the impulse, or the inspiration for such an occasion. Their day came, but not in 1914.

Poets and the Peacock Dinner: The Literary History of a Meal is published by Oxford University Press.