Book review: Margaret MacMillan on how wars – past, present and future – impact society 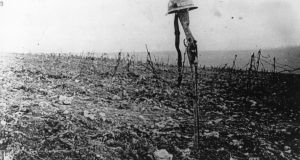 A French soldier’s grave, on the battlefield of Verdun: Wars are not part of our past, they are ongoing and are very likely to shape our future.

War has been a quintessential part of the human experience throughout history. For better or worse, it has shaped the world we live in. Most borders between countries around the globe are the result of armed conflicts. States and empires have risen and fallen as a consequence of wars. Economies, science, technology, medicine, art and culture have been profoundly transformed by wars, either as unintended consequences of conflict or as engines of accelerated change. Moreover, war is ongoing.

While for most western Europeans wars between states appear to be a thing of the past, a rather different picture emerges if we take a broader view. In large parts of Africa, Asia, South America and eastern Europe, the years since 1945 have been anything but peaceful. There has been a military conflict of one kind or another somewhere on the planet every year since the second World War came to an end.

1 Man found guilty of murdering girlfriend during drinking session
2 Cork shootings: Father and sons to be buried in two separate funerals
3 The real Contagion virus is out there and it’s causing virologists to worry
4 Postmortem results on mother and two children found dead in Dublin due on Friday
5 Majority of Irish Covid-19 cases come from variant that originated in Spain – study
6 First full moon on Halloween night since 1955 will be rare ‘blue moon’
7 Five lessons of Stoicism: What I learned from living for a week as a Stoic
8 Medical gaslighting: The women not listened to or viewed as overdramatising or catastrophising
9 Ana Kriégel murder trial: The complete story
10 Study finds retail workers serving customers have fivefold risk of Covid-19
11 Hawkins House demolition begins
12 Mazda’s first EV requires mental recalibration
13 New evidence emerges in shooting dead of teenager in Belfast in 1972
14 Sinn Féin senator and two party officials resign following Covid-19 grants controversy
15 ‘Trump would not be caught dead in Macomb County unless he wanted our votes’
16 America at Large: Golfers guilty of legitimising Trump’s toxic regime
17 Court ruling has major implications for reporting on killings of children
18 European leaders outline bleak Covid-19 outlook after states meet
19 Schools told to withdraw more than 50 hand sanitisers, wipes and detergents
20 Over 60% of mortgage holders miss chance to save €10,000
21 Two hundred Irish retailers for all your online Christmas shopping
22 Media critical to Ireland’s democracy, says Taoiseach
23 Armenians hope their fighting spirit will save them amid Nagorno-Karabakh conflict
24 Court upholds restriction on identifying mother who smothered child
25 Irish forestry ‘net emitter of greenhouse gases’
26 Stripe moves payment processing to Dublin due to Brexit
27 UCD professor asked to resign from EU committee over Covid-19 claims
28 Calm down covidiots, it’s nothing personal
29 Singer Niall Horan shares in €1.7m payday from Irish business
30 Coronavirus: Spain extends state of emergency by six months
31 Coronavirus: Let’s not do the same thing and expect a different outcome
32 Our landlord has asked us to leave, what happens if we don’t move out?
33 Aldi, Lidl bow to pressure to ban non-essential ‘middle aisle’ sales
34 Mother and baby homes report will increase calls for State redress, Cabinet told
35 Climate Bill criticised for lack of accountability and sanctions
36 Kanturk farm shootings: A timeline
37 Young homeless mother may have been dead in tent for a number of days
38 Time to disband the Defence Forces?
39 Covid-19: Number of people needing kidney dialysis has ‘increased dramatically’
40 Johnny Ronan loses out on €315m Dublin docklands deal
Real news has value SUBSCRIBE