Voices on Joyce: A showcase of Irish takes on James Joyce

The variety in this richly satisfying book is evident when we note how the insights of philosophy, musicology, and literary history and criticism are germane to Joyce studies 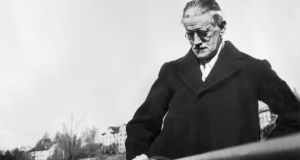 This substantial volume had its origin in a University College Dublin lecture series in 2004, to mark the centenary of Bloomsday. The contributors for the most part are current or retired professors at UCD. In her introduction Anne Fogarty, professor of James Joyce studies, tells us how the book grew into a collaborative venture that, in keeping with the plurality of the Joycean oeuvre, drew on “many disparate areas of expertise with distinct methodologies and competing areas of enquiry”.

Unsurprisingly, given how deeply engaged with history Joyce’s key texts are, the discipline of historical study is represented in the book by a number of fine essays. (The idiolect, despite the volume’s title, is more that of the scholarly article than that of the lecture hall.)

Cormac Ó Gráda informs us about the Jewish community in Leopold Bloom’s Dublin, a community that was mainly Lithuanian by extraction and Yiddish speaking. Ó Gráda gives us to understand that the English-speaking Bloom, who had “married out”, was a figure who, had he stepped out of the pages of Ulysses into the Dublin of 1904, would probably have been no more welcome in the city’s Jewish community than he was among the habitues of Barney Kiernan’s pub in the “Cyclops” episode. This important essay challenges us to rethink the meaning of Bloom’s Jewishness in the novel as that of a very specific kind of outsider.

In another historical essay Michael Laffan compellingly surveys the Ireland of 1904, suggesting that Joyce’s castigation of Dublin, in Dubliners, as the centre of Irish paralysis was wide of the mark, as the forces that would shape the nation’s destiny by the next decade were stirring and the societal divisions that would provoke change were becoming more pronounced.

In effect Laffan’s article is a telling answer to a question posed in 1970 by the historian FSL Lyons when he asked if Joyce’s Dublin was “really in the grip of an inexorable paralysis”. Dublin’s poverty, some of the extremity of which can be grasped from reading Joyce’s works, was certainly a downside of the city.

In a fascinating essay the geographer Joseph Brady explores how poverty was not the whole of the case in Bloom’s Dublin. He explores how in a complex city of contrasts a minority of the population could live comfortable and fashionable lives. At a time when the average weekly wage of a labourer was £1 the city “presented a number of faces to the world . . . One face was pinched with poverty; another suffused with wealth and well-being.”

Lyons implied that a city that could produce a Joyce was no mean city, nor one bereft of cultural dynamism. In a very valuable essay on Joyce’s UCD, the historian Donal McCartney adduces evidence to show how the college from which Joyce graduated, despite its small size and limited funding, was a formative influence for a number of Irishmen who would adorn national life in years to come, among them Tom Kettle, Arthur Clery and various eminent men of law, including a chief justice.

The small professoriate included learned and nationally engaged Jesuit priests such as Tom Finlay, who later would help to found the co-operative movement. McCartney’s listing of the Jesuit members of the faculty reminds us that had the English poet and classics scholar Gerard Manley Hopkins not died in service of the college in 1889 he would almost certainly have been one of Joyce’s instructors, probably to figure in the author’s Stephen Hero and A Portrait of the Artist as a Young Man.

Conversations between them would have been interesting indeed, sharing as they did a deep interest in the Greek philosophers and a fascination with etymologies and Irish-English linguistic usage. This latter interest of Joyce’s is treated with adroit urbanity in this volume by Prof Terence Dolan; Joyce’s debt to Aristotle is examined in an illuminating essay by Prof Fran O’Rourke, who makes the stimulating claim that they shared “the recognition of analogy as fundamental to our understanding of nature”; O’Rourke proves himself an adept user of analogy when he writes that Joyce “maintained his equipoise; between the magpie’s beak, which gathered the detritus and discarded debris of everyday living, Joyce had the eagle eye to grasp the grand majestic design”.

The variety of approaches to Joyce in this richly satisfying book are evident when we note how the insights of philosophy, musicology, and literary history and criticism are germane to Joyce studies. Richard Kearney examines the concept of epiphany in a happy blend of aesthetics with theology and literary criticism. In his essay on Joyce’s engagement with music, which supplies a striking reading of the “Cyclops” episode as oratorio, Harry White challenges us with his conclusion that “Finnegans Wake is not a musical work. It is not music.”

The book’s range of topics is even clearer when we note Prof Conal Hooper’s essay on sport in Ulysses and Adrian Hardiman’s on Joyce’s close interest, in Ulysses, in three legal cases involving unnatural death. These two pieces introduce an underlying theme: the concerns of the common man and woman.

Relatedly, Kearney concludes of an episode in the novel that it endorses an epiphany that would be “democratic rather than elitist, and deeply demotic in its fidelity to the ordinary universe”. And in his piece Ulysses and Us, Declan Kiberd makes an eloquent plea for a “popular reading” of a text that affords, as great books do, much wisdom about life and how to live it.

The complex texture of this collection, which showcases UCD as a centre of Joyce studies, is given added strength by Lee Miller’s photographs. Shot in 1946 to accompany an article on Joyce in Vogue, by his friend Constantine Curran, these hauntingly capture a good deal of what remained of Joycean Dublin and evoke the ordinary life that Joyce honoured so comprehensively in his writings.

Terence Brown is an emeritus fellow of Trinity College Dublin